The MAT: Everything’s Coming Up Rozes 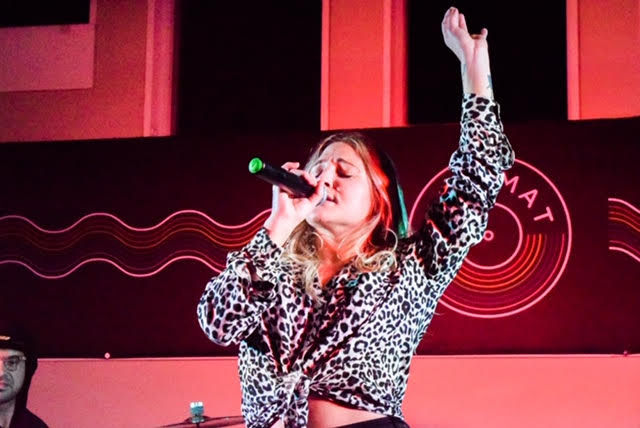 Ending the school week on a high note Colgate students headed down to 28 College Street to check out The Mat last Friday where they heard performances from Lisa Heller ‘18 and ROZES.

Before the show, students had plenty of time for students to mingle and grab some food and for those over 21 to enjoy the cash bar.

Heller, a recent Colgate alum currently pursuing a music career in Los Angeles, opened the show. Seated at round tables and couches, the audience listened intently, laughing at Heller’s mention of the Old Stone Jug in her 2019 hit “Ghost.”

One of the highpoints of Heller’s set was her song “Hope,” which was released in 2016 and met with worldwide success, currently sitting at 1.6 million views on YouTube and at one time topping the trending pages in Sweden, Canada, Ireland, Denmark, Australia and Italy.

Heller ended her set with a new single, “Red Flags,” which she described to be about the feeling of staying with someone despite noticing warning signs in them and the relationship.

Afterward, Elizabeth Mencel, also known by her stage name ROZES, took the stage with drummer Benny Brown. It was through both of their energy and excitement that the audience began to join in on the action, congregating at the front of the room to dance to the music and get a better view of the performance.

The songs of the night ranged from Mencel’s solo work—such as her successful 2019 release “Halfway There” (currently at over 11 million streams on Spotify)—to her impressive features, notably her 2017 song with Galantis “Girls on Boys” her most famous hit (it currently boasts over 700 million plays on Spotify) “Roses,” which she created with The Chainsmokers in 2015.

Before “Roses” began, Mencel took some time to converse with the audience, complimenting Colgate’s fall foliage with  West-Coaster remarks like “it’s beautiful, you guys win.” Segueing into her performance of “Roses,” Mencel asked for some audience participation.

“This is a song I wrote with my friends The Chainsmokers, if you guys know it, please sing it with me,” said Mencel.

This performance was the highpoint of the night, as seemingly everyone in the venue knew the words to the song, shamelessly singing and dancing along, adding to the energy of Mencel and Brown’s performance.

After the show, some lucky fans were able to snag a quick photo with the artists. Even Lisa Heller and ROZES both posted photos together after the night’s end, cementing the success of the show.

This was The Mat’s third show of the year. Upcoming shows have yet to be announced.