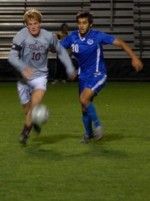 The men’s soccer team came away with a loss and a tie in its last two games. The Holy Cross Crusaders defeated the Raiders last Saturday afternoon at the Linda Johnson Smith Soccer Stadium in Worcester, MA by a score of 2-0. The loss was the team’s fourth consecutive and second league loss this year. They followed up the loss with a scoreless home draw against Hartwick.

The Crusaders relied on two early goals, getting both of them in the first five minutes of the match. This caused Colgate to tighten up their defense and be less aggressive on offense. However, the defense was able to settle in and the Raiders actually dominated the Crusaders offensively for the rest of the game. Holy Cross got their first goal of the game in the second minute when first-year forward Shane Regan fired home his shot from inside the 18-yard box off an assist from sophomore midfielder Jordan Michael. The goal marked Regan’s second goal of the season. Michael then scored a goal himself off a rebound surrendered by Colgate sophomore goalie Chris Miller on a blast from Crusader junior forward Kyle Miller. It was Miller’s first action he had seen in a couple games as he had been out with a hamstring injury.

The rest of the half was much more even, but the Raiders could not draw any blood and headed into the half down 2-0. The Raiders came out very aggressively in the second half, but could not put anything in the net. Colgate’s best chances came on back-to-back shots by senior midfielder Alex Weekes and first-year midfielder Mike Reidy but both were stopped by Holy Cross senior goalkeeper Thomas Booth. The Raiders tallied eight corners in the half, and twelve for the game to just seven for Holy Cross, but could not create any goals from these opportunities. The Raiders also drastically out-shot Holy Cross 18-7, including 8-1 in the second half. Weekes had nine shots for the Raiders, four of which were on target. Booth made seven saves in the match, and the Crusaders notched their second consecutive shutout on the season. Miller had two saves between the posts for the Raiders.

Against Hartwick, each team played a good half of soccer, but neither was able to put one in the net. Hartwick had the upper hand in the first half, doubling up the Raiders in shots 6-3, while the Raiders controlled the second half out-shooting the Hawks 14-9, including one 30-minute stretch where the Raiders got off 10 shots to the Hawks one. Many of these chances proved to be good, including one shot from first-year Mike Garzi that was headed for the top of the goal, but was bumped over the net by Hartwick junior goalie Jeremey Vuolo. On the ensuing corner kick, Garzi crossed it into the center of the box right to junior defender Paul Visiglio whose shot went just wide of the post. However, this offensive domination did not translate into any goals for the Raiders.

The Raiders’ best chance of the game came in the first overtime session as first-year midfielder Shane Conlin was able to gain control of a cross after beating two Hartwick defenders to the ball, but Conlin’s shot sailed just wide of the post. The Raiders also came devastatingly close to claiming the victory in overtime when senior midfielder Alex Weekes had the ball directly in front of Vuolo, but yet again a Raider shot went just wide of the post. Hartwick’s last opportunity of the game almost gave them the victory when senior defender Brian Gordon took a good shot on goal forcing Colgate sophomore goalie Colin Prather to make a diving save. The ball then bounded over to junior defender Carson Pryde who took a shot on goal, but Prather was somehow able to recover and make another save. Prather had five saves in his first career start for Colgate. Vuolo had four saves for Hartwick.

Colgate’s next game takes place this Saturday when the Raiders take on the Black Knights of Army at 7 p.m. at Van Doren Field.