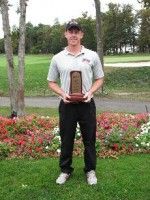 The golf team competed at the Eastern College Athletic Association (ECAC) Championships last weekend, which was held at Blue Heron Pines Golf Club in Egg Harbor City, New Jersey. The Raiders took tied for third place overall in a tournament of nine teams as Colgate’s golfers combined for a score of 630. The tournament was won by Fordham University, who received a total score of 623.

Seniod David Ake, however, was the star of the show, as he took home the Individual Gold Medalist Title by shooting six-over 150 on the par-72 course.

“I am very happy with the way things turned out this weekend,” Ake reflected on his performance. “I made a few mistakes but I was able to come back and stay focused. The fact that I was able to finish with back to back birdies to win by one is a huge accomplishment and will go a long way to improving my confidence going forward. Winning a collegiate event individually has always been my top personal goal, and I hope this will spring board me to future success.”

“David exemplified his leadership skills magnificently this weekend, and was able to keep his composure during a high pressure situation,” Coach Keith Tyburski said. “His ability to recover from mistakes and stay patient in adverse weather conditions proved to be the deciding factor. We are all extremely happy for him, and hope he can continue his strong play for the remainder of his senior year.”

First-year Will Delano scored an 80 on his first round, ranking second among Colgate golfers. With matching scores of 83, sophomore Ben Jessen and senior Nick Parry began the weekend with strong rounds. Sophomore Chase Williams made his debut on the team’s competition roster with an opening round score of 87.

The team scored a collective 320 during the first day’s competition, ranking them sixth.

Moving up the rankings to third place, Colgate’s team score for the second round was 310.

“I think that it was important that we came back strong on day two, but overall we are not real happy with the weekend’s results,” Ake said. “We did not score well or minimize mistakes well enough. This was a tournament that we should have won, and we really let a good opportunity slip through our fingers. This was not a tournament where top three was good enough. I hope next weekend we can play smarter golf and avoid making avoidable mistakes.”

Looking ahead to the golf team’s next tournament which will take place this weekend at Lehigh, Coach Tyburski foresees a good tournament.

“The field at Lehigh will be strong, so we will have another opportunity to showcase our talent,” coach Tyburski said. “A strong finish at Lehigh would not only boost our confidence heading into the spring, but would also show other programs that we are a contender in the Patriot League heading into the League Championship (which we host) in the Spring.”