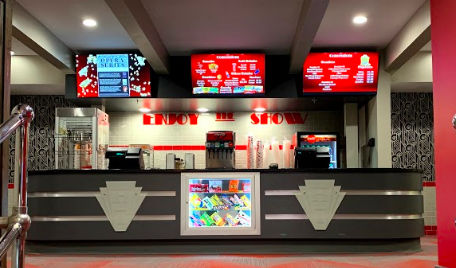 The Hamilton Movie Theater is a familiar scene to me. Beyond my relationship to it as one of Maroon News’ movie reviewers, and it being the go-to place for movies in Hamilton, I have very fond memories of the theater. So, I was quite surprised to learn that it was under renovations. On Friday, October 4, Sean Nevison, Hamilton Movie Theater’s General Manager, was in the middle of managing both final construction operations and his young son, who was playing by his office when he let me in to have a look around.

The difference between the old theater and the newly renovated space is incredible. The foyer has a beautiful new aesthetic. A fusion of the roaring 20s and modern classic, it is clean yet classy. New refreshment stands and ticketing counters greet moviegoers, and instead of dusty chalkboards, there are TV panels that display prices for tickets, menus, and more. A new lift is in place to aid the disabled, and one of the main theater’s entrances is now a wheelchair entrance. The bathrooms are completely re-done—there is even a new family bathroom for those with kids. There is also a new audio/visual system that provides subtitles in select languages for audience members—a small LCD with a light system displays them in sync with the movie.

Moving past the foyer, the screening rooms themselves are gorgeous as well. The old chairs have been replaced with wonderfully spacious leather chairs, and there is space in the main theater for wheelchairs. Sean and Co. have completely stripped down the old foam insulation on the walls (and behind the screens) for new sound proofing boards to prevent noise from bleeding between theaters. A new array of speakers lines a newly cleaned screen for the now 7.1 surround sound, along with new servers and projectors. As I would later learn, the most expensive undertaking by far was a replacement of the HVAC (heating, ventilation, air conditioning) system—the old systems had been running since the 1970s and were in need of replacement.

As a resident of Hamilton since 1978 and former student at Colgate, Nevison went around the U.S. after graduating and has been back for the last 12 years in Hamilton. The idea for renovations started when Nevison took his position four years ago. Along with the Hamilton initiative, run by Shannon Montaro, quotes will be taken on costs to refinish chairs. “We came close, but things got delayed,” Nevison said.

Fast forward to November of 2018, when Nevison “was approached by JS Hope.

Hope said they wanted to pull the trigger and do the renovations again, but this time, we really upgraded the seats,” he said. It did not stop there either.

“We did a facelift of the entire thing. Besides the marquee, everything is entirely different… unique, historic, classy, and fun—we wanted to give it that small town vibe, bring it back to the roaring 20s, because we’re about to hit the 20s again!” he said. It’s something that will go well with the apt first show when it opens: 1985’s Back to the Future.

“We’re not looking to try to make money with the renovations—our prices only went up one quarter, 25 cents, and that’s just to make it easier to wring in,” Nevison said.

With the administration’s support for the arts within the community, Nevison also talked about expanding the scope of the theatre, making it more of a theatre than a movie theatre. An exciting schedule seemed to line up of opera, speakers, live music (in the preserved orchestra pit), with something new happening all the time.