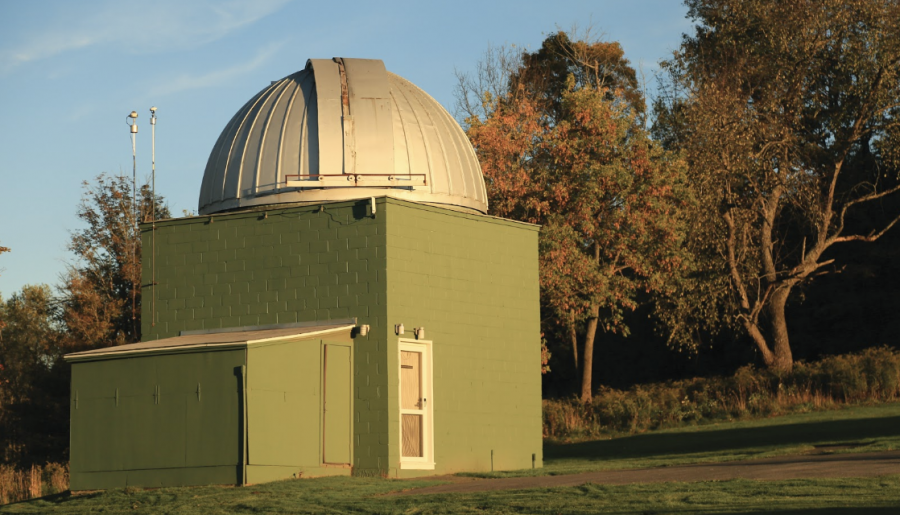 In response to a movement to restore the view of the night sky from the Foggy Bottom Observatory, University President Brian Casey is working with Building and Grounds and the Physics and Astronomy Departments, as well as hired contractors to take steps in limiting the effects of light pollution from new residence facilities Burke and Jane Pinchen Hall. A recent Maroon-News story detailed Astronomy students’ frustrations with the light interference. Notably, 20 lamp posts are visible from the observatory dome which significantly hinders the ability to research the night sky.

Associate Vice President for Facilities and Capital Projects Steve Hughes and President Casey both explained that there is action being taken to address the issue. Hughes said they have been in contact with the astronomy department to start the process. He explained a possible fix would require adjusting the light fixtures in question to mimic the lights in the nearby parking lot, which hook up to a switch in the observatory that allows researchers to turn them off for an hour. However, the new lamps are routed in a series so it would be difficult to rewire them.

President Casey explained the steps that Building and Grounds and the newly hired outside contractors plan to take to address the issue. He discussed current obstacles, such as the wattage, timing and the glass panels that are scattering light, polluting the view.

“[Hughes] knows to change the wattage, the timing and I think they’re going to remove the panels,” Casey said. “We hired a nationally regarded landscape firm, [however] I think that we [additionally] might want to edit some lights out around.”

Jeff Bary, Associate Professor of Physics and Astronomy, echoed that the wattage, timing, panels and number of lights need to be addressed. However, he emphasized that the process is much more complicated and fixing it might require long-term adjustments.

“The color of the lights on campus were a little too white. Observatories use red lights. The red lights do not diminish your night vision. Red photons do not screw up your eyes’ ability to see low-light levels. If you are sensitive to seeing the night sky well, you want to have lights that are on the yellow/orang-ish side of the spectrum as opposed to white,”

Bary said. “[I] hoped that these new lights would be yellow/orangish to observe the dark sky. These new lighting standards were not discussed with the astronomers.”

Hughes pointed out that the observatory’s current location is an obstacle in itself. He mentioned previous plans to move the

Observatory elsewhere to resolve the issue; however, the plans were not pursued, as the move would further the observatory from the center of campus and would require a generous donor.

“It’s all about the money,” Hughes said.

He emphasized that ambient light from residence hall windows also interferes with views from the observatory, which would not be addressed by moving outside lights.

President Casey, like Hughes, brought up a renovation and a possible new location in tentative long-term plans for the observatory.

“I think at some point the observatory has to get relocated. First of all, it probably is time for it to be rebuilt,” Casey said. “I’d have to find potential donors for it and the right location, because it has to face south, so you have to find a dark southern facing exposure that’s [also] not too far from the campus. I don’t know where that is, but I think that’s the long-term.”

Professor Jeff Bary, Associate Professor of Physics and Astronomy, made it clear that the Astronomy Department was not included in the decision for the light fixtures. He explained that he would have chosen a fixture with full shielding, with no glass and with cooler temperature bulbs. The department did reach out during construction with suggestions.

Hughes explained all the new lamps installed are night sky-compliant, meaning the shades direct all light downwards and limit ambient light. However, President Casey and Hughes expressed a misunderstanding of the effect the lights would have at the time the lights were purchased. President Casey explained that he was actively involved in the purchase of the partially shaded lights, but beyond that his understanding was limited.

“[I] was very involved in the selection of the cut off lights, that’s the lights that go down. I didn’t realize, and I don’t think anyone did, that putting in the glass panels would have a diffusing quality to it,” Casey said. “According to the village, all new construction has to have certain lighting requirements for safety, so I think we were a little bit caught between state regulations [and what Colgate needs].”

Hughes echoed Casey’s statement; however, he clarified that the visibility issues primarily affect the telescopes that are generally placed outside of the observatory, not the large telescope within the observatory. Hughes explained that facilities now understands that the new construction is elevated high enough so that it interferes with the scope of the dome, even with night sky-compliant lamps.

Professor Bary explained that the lighting problem goes far beyond the inefficiency of the partially shaded light fixtures and emphasized that there are simply too many lights. He also touched upon the issue of the lights in Gate House parking lot.

President Casey sympathized with the Department of Astronomy and Physics.

“I take the physics department’s point, I absolutely do,” Casey said. “And I feel guilty because my house is built there too — I’m a light polluter!”

Professor Bary shared that he was unaware of an explicit timeline for possible lighting fixes, but said that President Casey’s plans would be helpful.

“Casey supports fixing these lights but acknowledges that this was more difficult than he anticipated. The observatory is getting older and more outdated. There have been discussions to build a new observatory and if we could, where would it go?” Bary said. “As long as Colgate is sensitive to the light issues, Colgate should be able to keep the observatory on campus and where students live. Although students go to New Mexico for four days and use a 3.5 meter telescope (fairly large), this is not as accessible and remote as an observatory on campus.”

Junior Daniel Doughtery, an astrophysics and philosophy double concentrator, is a tutor for Astronomy 101. He spent the summer working at Foggy Bottom and likes to do homework or use the space to get away from campus chaos. He shared that he became aware of the issue during the summer.

“[Professor Balonek’s] research students were keenly aware of the dorm lights situation over the summer. We could hardly point the observatory telescope in the northwest corner,” Doughtery said.

Sophomore Fairuz Ishraque is a double concentrator in Astrogeophysics and applied math. Ishraque also spent the summer doing research at the observatory. He, like Doughtery, emphasized the importance of keeping this space accessible.

“Even last year I used to go up to the observatory to stargaze all the time. The sky conditions were phenomenal compared to now,” Ishraque said. “Now we can’t turn in the general direction of the new dorms or the Gate House parking lot, otherwise we risk losing our eyes’ dark adaptation, which takes us 15-20 minutes to regain.”

“A significant portion of that course depends on us learning to use our eyes to estimate brightnesses of stars – sometimes of variable brightness,” Ishraque said. “That is very hard to do when almost every direction we turn at the observatory costs us our dark adaptation and essentially renders us unable to take reliable measurements for exercises in the class.”

Israque shared that the issue needs to be resolved in steps, but is not hopeful about a full recovery of the night sky. “No matter how much we shield the dorm lights, they have ruined the observing conditions at the observatory beyond complete recovery. It impedes data collection for research at the observatory to the point of utter frustration sometimes,” Israque said. “The final goal should be to build a new observatory at a safer location.”

President Casey gave no specific timeline or dates in which this issues would be address. However, he expects it will be “fairly soon.”