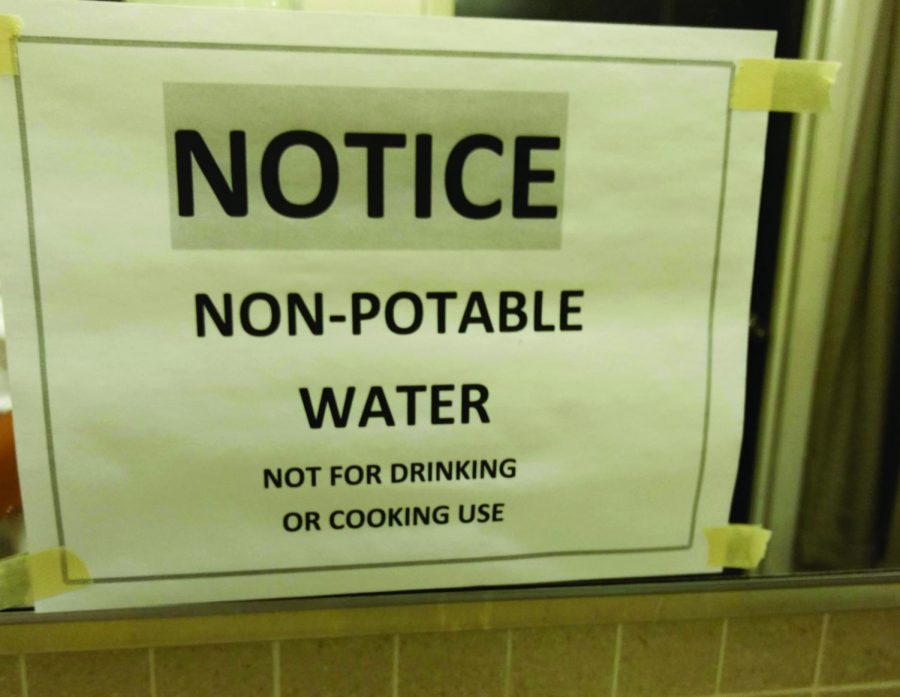 Lead in the Water

Update 10/24: Sinks and water refilling stations in the library now have non-potable water signs, meaning the water in the library contains elevated levels of lead. The full results of testing around campus can be found here.

On October 8, the University announced the results of tests showing elevated water lead levels above the US Environmental Protection Agency’s (EPA) action level for the substance in 72, 80 and 84 Broad Street residences.

According to Director of Environmental Health and Safety Mary Williams, a chemistry student found high levels of lead in testing a water sample from the 80 Broad Street house in a lab analysis in late September.

“When the initial results appeared to show the presence of lead, the professor brought it to the attention of university staff members. Environmental Health and Safety promptly collected samples to send to a New York State ELAP certified lab for official analysis,” Williams said.

According to senior Adrianna Elashker, a resident of 72 Broad Street, residents were first notified of the issue October 8. Elashker said that administration failed to notify residents prior to beginning testing and dispenser installation.

“I think [the administration has] done an okay job of handling the situation,” Elashker said. “However, I think that there could have been a lot more transparency, especially early on. For a few days there were people testing water and installing dispensers without us knowing why or what was going on.”

According to Williams, Environmental Health and Safety began to strategically test water samples from various locations on campus after their initial findings, discovering elevated lead levels in water in buildings between 40 Broad Street and 118 Broad Street, as well as on Hamilton Street and College Street, University Court, Parker Apartments and Newell Apartments According to Williams, the entirety of campus receives water from the wells which supply the Village of Hamilton. She suggested that students who live off-campus may also be impacted by the contamination, and should arrange for water testing through their landlord or through a complimentary New York State program.

“There is no evidence of the presence of elevated levels of lead in the Village water supply. The presence of lead in water samples taken in various buildings can vary widely depending on the particular plumbing systems and fixtures within those buildings,” Loveless said.

According to Loveless, Hamilton abides by New York State Health Department standards for routine water tests for lead, which most recently occurred in September 2017.

“Of the 26 locations tested, only one sample exceeded the EPA standard, and that was later determined to be due to a particular plumbing fixture within the home,” Loveless said.

Loveless said her position as mayor includes heading the Village’s participation in the combined investigation with the University on the cause of the contamination.

“There is no specific timeline for this process, as each location presents a different set of variables, most of which are unrelated to the Village water supply itself,” Loveless said.

Senior JJ Citron, who lives off-campus on Hamilton Street, said it came to her attention that another building on the street came back with high levels of lead in the water, sparking unease within her household.

“Of course the phrase ‘lead contamination’ has instilled nervousness in my fellow housemates. But there are action steps that we can take to ensure our safety, such as letting the water run before drinking and purchasing filters,” Citron said. “I think that the contamination news has definitely started conversation and sparked unease [for the student body].”

“I continue to be impressed by the professionalism, skill, and speed of our Environmental Health and Safety Office and the Emergency Operations Center (a group of colleagues from across the University who work together to manage incidents like this). Together, these colleagues have developed a systematic plan for testing to better understand where the issue is coming from and to create short-term solutions. We are working with the Village in our efforts and are in regular communication as we address this issue,” McLaughlin said.

McLaughlin said he encourages students to utilize the University Correspondence page on the Colgate website as developments on the situation continue and to easily access provided resources.

According to Williams, while a long-term solution to the issue has yet to be established, pending the cause of the contamination, Environmental Health and Safety plans to institute measures to monitor lead levels in campus water going forward.