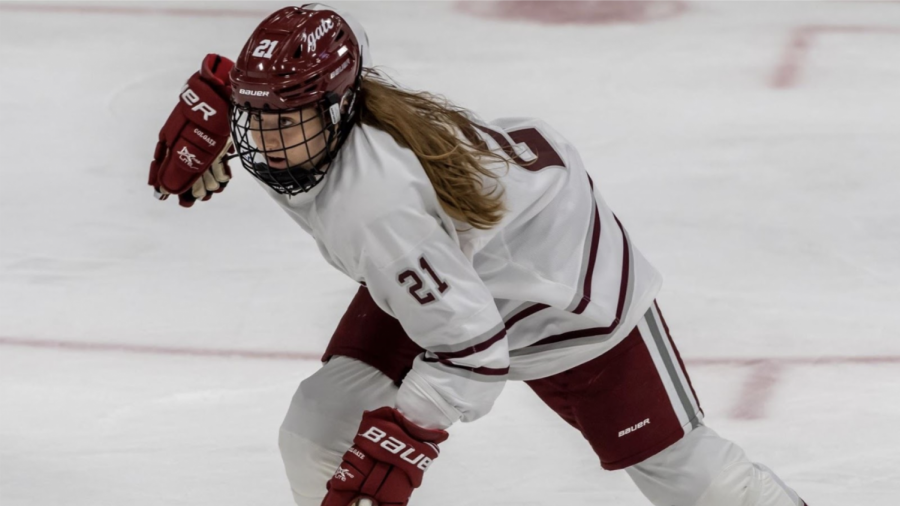 This past weekend, the Colgate Raiders women’s ice hockey team squared off against the Mercyhurst Lakers in a two-game set in Hamilton for Homecoming weekend.

This was their first clash with the Lakers since last season, when the Raiders surrendered nine goals in two games, losing one and drawing the other. Although Colgate had the last laugh, finishing with eight more wins overall, this weekend offered an opportunity for a statement win.

When the Homecoming excitement began, the Raiders came ready to dance. Game One of the weekend on Friday, October 4 began intensely, with the two teams trading possessions and offensive efforts deep into the period. With about five minutes left, Colgate broke through with a spectacular, some might say, telepathic twin connection: Sophomore Delani MacKay fed the puck to her twin sister, Eleri MacKay who put it in the back of the net for a 1-0 Colgate lead.

Mercyhurst responded swiftly, however, with junior Alexa Vasko capitalizing on a power play opportunity to tie the score at one apiece.

The Raiders fortified their defenses as the period waged on, with the next three ensuing power plays coming up empty for the Lakers at the hands of the Colgate penalty kill. In total, there were a whopping five penalties in the second period alone, and Colgate limited Mercyhurst to just six shots in all those chances. Ironically, the decisive goal came with less than two minutes left with no on-ice advantage for either team. Sophomore forward Noemi Neubauerova put the Raiders up for good with her late-period score. There would be no penalty or scoring action in the third, and Colgate emerged victorious with a 2-1 final.

Sunday’s matchup would prove perhaps even more contentious. The sequel had some familiar drama to start out. Barely five minutes into the match, Mercyhurst suffered a penalty that put Colgate on a power play that resulted in another Mackay goal, this time Eleri assisting Delani’s scoring effort (yeah, there’s definitely some twin telepathy). With the energy dialed up, the period ended with the Raiders holding firmly to a 1-0 lead.

The second period featured goals, goals and more goals. Junior forward and team captain Coralie Larose boosted the lead to two with a masterful strike in transition, but this would prove to be the most transient score of the entire weekend. Back-and-forth they went: not 90 seconds later, Mercyhurst’s Sam Isbell cut the gap to one goal. Then, two and a half minutes later, the game was all square at two goals apiece. Mercyhurst emptied their net and it paid dividends almost immediately.

Colgate did not relent, however. They fended off a Mercyhurst power play, then got the offensive engines going again to secure a 3-2 lead late in the second. First-year Darcie Lappan recorded her first goal of her Raider career off assists from Neubauerova and junior Shelby Wood. Even though Colgate had unquestionably exorcised its demons from last year’s series by this point, this rollercoaster series had more left in the tank.

Ten minutes into the third period, Mercyhurst somehow was able to tie the game up at three goals each off a goal from junior Megan Korcak. Defense came up huge for the Raiders down the stretch, as senior Liz Auby made three clutch saves and the back line blocked every shot that came Colgate’s way. The overtime fourth period had no goals, and the game ended in a 3-3 draw.

Despite only coming away from the weekend with one victory, the team’s performance has rejuvenated the season and given head coach Greg Fargo a lot to be confident in.

“With every game, we’re gaining experience,” Fargo said. “Even thinking about what we’ve learned here in the first five games, these are all good experiences as long as we continue to hold on to the ground that we take.”

The outlook is bright for the Raiders. Their youthful core kept the energy high. But, it was unsung hero Auby who showed the most grit this weekend, saving 51 of 55 shots andearning ECAC Goalie of the Week honors.

Colgate will face-off next against the Syracuse Orange for a home-and-home upon return from fall break. Puck drop is Friday, October 18 at 6 p.m. at the Class of 1965 Arena.