Death, Remembrance and the Slave Past 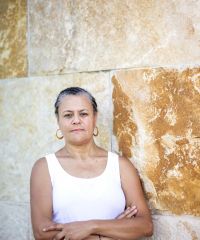 It has been 270 years since the founding of Alexandria, Virginia as a tobacco trading post in July of 1749. In the nearly three centuries since, the city has experienced countless transformations, which ultimately culminated in the creation of the Contrabands and Freedmen Cemetery Memorial, the discussion topic of Dr. Renée Ater’s Art and Art History Lecture, “Death, Remembrance, and the Slave Past” on Wednesday, October 2.

Associate Professor Emerita at the University of Maryland Arter began her talk by explaining the history of Alexandria and how it became home to arguably one of the most important slave memorials in America.

Serving as a key slave trading site throughout the 18th and mid-19th century before Union Army occupation ended the practice, from 1862 onward, Alexandria became a different kind of hub for slaves, no longer a trading site but as a safe haven of sorts. Nearly 10,000 newly emancipated slaves poured into the city during this time housed in small barracks that were often crawling with sickness and disease.

It was in 1864 that the city realized the demand for a larger cemetery, seizing the plot of land that would become the Contrabands and Freedmen Cemetery. By 1900, the cemetery had disappeared from nearly every map of the city, something that Ater notes as a remarkable moment.

It was with the removal of the cemetery from maps that the site’s erasure became cemented, and starting in the mid 20th century, the plot of land became free to build upon. In 1955, a gas station was erected; in 1960, an office building was constructed atop the once sacred site.

It was not until 1987 when research historian T. Michael Miller rediscovered the cemetery that its importance was emphasized once again, with author Wesley Pippenger later publishing the Gladwin Records in 1995 in an attempt to discern the actual number of deceased buried in the cemetery. By 1999, archaeological excavations had worked to identify 540 graves.

One of the most important contributions to the eventual memorialization of the site that Ater discussed was the work of Louise Massoud and Lillie Finklea, two women who lobbied for the city of Alexandria’s repurchasing of the land to effectively honor those buried beneath it.

Working for just over ten years from 1996 to 2007 by placing signs at the site, leaving flowers and holding memorials for the deceased, Massoud and Finklea were ultimately successful in their pursuits. A design competition was announced in 2008 to find an artist who could successfully memorialize the cemetery.

The cemetery was reopened and dedicated in September of 2014 as the Contrabands and Freedmen Cemetery Memorial. Local architect C.J. Howard’s effective minimalism and open structure design offers both public reflection and private remembrance.

However, one of Arter’s main issues with the site is a bronze sculpture by artist Mario Chiodo. The piece, which depicts black bodies contorted in various different forms to represent figurative notions of Oppression, Struggle, Sacrifice, Loss, Compassion and Hope is, in Ater’s opinion, offensive.

“Monument as a form is a failure,” Arter said. “It is so embedded in 19th century representations of the black body.”

Thus, Ater concluded her lecture by stressing the takeaway that, while attempts at memorializing and monumentalizing our nation’s painful past show that we are working hard to reckon with these memories, until a site recognizes all the facets that come with acknowledging a past as complicated as America’s, we have not accomplished true memorialization.