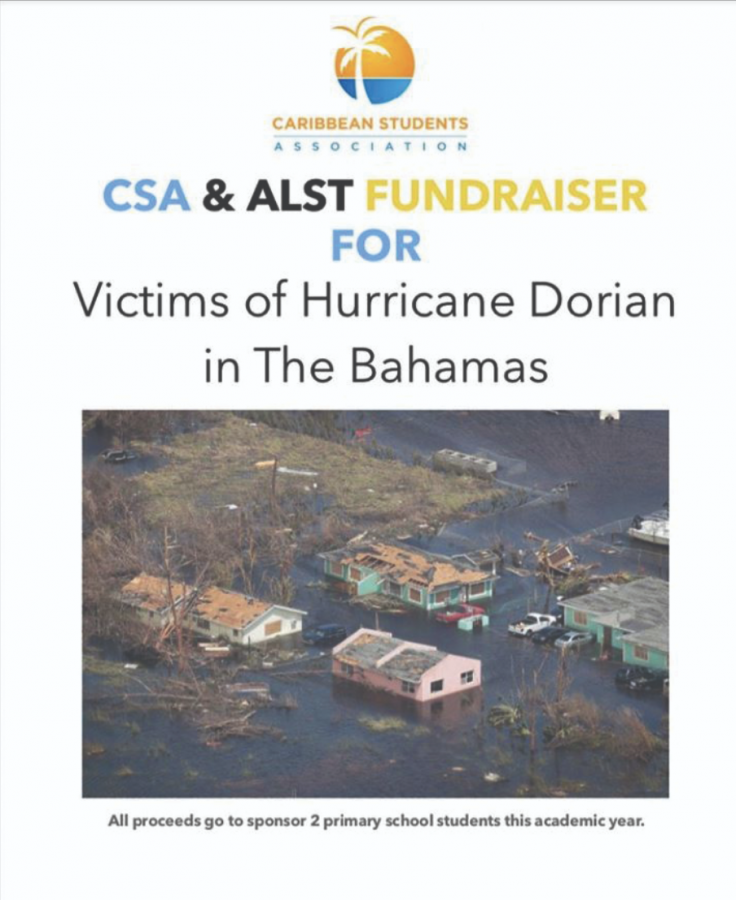 In the wake of the destruction of Hurricane Dorian, the Caribbean Students Association (CSA), led by senior Ashly Loibman, started a GoFund-Me page on September 13, 2019 to support those affected. Hitting the Bahamas from September 1 to 3, the Category 5 hurricane devastated the Abaco Islands and the island of Grand Bahama, causing over 7 billion dollars in damage and at least 60 deaths. It is the strongest hurricane to strike in the history of the Bahamas and it is expected to take years to rebuild.

Many of the displaced, who number in the thousands and have lost almost everything, are seeking relief in Nassau, the nation’s capital. The CSA plans to use the donations to send two affected children to St. Thomas More Primary School in Nassau. The fundraiser focuses on children, as the club believes that the best way to show support is through education.

The CSA manned tables at the O’Connor Campus Center (the Coop) and at the Family Weekend registration at Donovan’s Pub to collect donations. The fundraiser has raised 1,630 dollars out of the 6,792 dollars needed to cover all explicit costs for one school year, including tuition, uniforms and food, but the goal on the GoFundMe page has been set to 10,000 dollars to be able to pay for school supplies and any other expenses the students may have.

CSA Board Member Angie Diaz explained the obstacles the club has encountered.

“A challenge we faced during the fundraiser was getting enough people to donate to the cause. The issue was not that people did not care; it was more a problem of being a college student with a limited amount of funds. This is why it was important to explain to students the purpose of the fundraiser and where exactly the money was going,” Diaz said.

Loibman, who is from Nassau, knows many of those who have been affected. She is using the help of family, friends and social services in the Bahamas to help facilitate the process and locate affected children.

According to Loibman, instead of going through any major organizations providing aid to the Bahamas, the CSA has decided to fundraise independently for greater transparency and control.

“There’s always a lack of transparency with organizations, especially if you aren’t there on the ground. I wanted to eliminate that element and provide help that was tangible,” Loibman said.

Associate Professor of English and Africana and Latin American Studies Kezia Page vocalized her support of the CSA’s mission.

“The CSA’s way of giving is very personal. It’s not directly about infrastructure, it’s about two lives. It’s perfect for a small student organization,” Page said.

Although the CSA is no longer organizing tables, the GoFundMe is still active and can be found on the Maroon-News website.