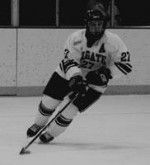 The men’s hockey team closed its home season in impressive fashion, going unbeaten in their remaining two games. They tied the Union Dutchmen in the last seconds to earn a 2-2 tie, and defeated the Rensselaer Engineers the following night by a score of 2-1. The three points earned moved the Raiders up in the ECAC standings to 10th. Colgate is 3-1-1 in their last five games, as it prepares for the final weekend of the regular season.

“I believe this team can go as far as possible,” junior goaltender Charles Long said “Where we are right now in the standings, with two games left in the regular season, means we’re definitely playing in the first round [of the playoffs] on the road. I know all of the guys want to go as far as possible, as they wouldn’t be on the team if they didn’t want to.”

After a strong game against the Dartmouth Big Green the previous weekend, Colgate came out flat in the first period against Union. Their opponents came out seeking revenge for the humiliating loss they suffered last year at Starr Rink, when the boys from Hamilton defeated them by a score of 8-0.

The first goal of the game came at the 8:43 mark of the first period when the Dutchmen scored on the power play to go ahead 1-0. Union continued controlling the play, and would have added to the lead if it weren’t for the play of Long. The Raiders, however, also had several opportunities to knot the game at one, yet were unable to put anything past the opposing goaltender, Corey Milan.

Colgate came out aggressively in the second period, seeking to avoid a season sweep at the hands of Union. Colgate poured shot after shot on Milan, and this period it was his turn to stand on his head and maintain the frail lead his team held against the Raiders. After all the hosts’ effort, however, Union still held the lead at the end of the second.

The third stanza was possibly the most entertaining out of the three. Colgate came out playing with urgency hoping to at least tie the game, while the Dutchmen sought their first win at Starr in more than ten years. The Raiders’ efforts finally came through at the 14:12 mark of the period, when junior Ethan Cox scored off an assist from senior David Sloane. Cox fired a slap shot from the left circle that hit the crossbar and went right into the net protected by Milan. Three minutes later, however, Colgate was back to square one as Union scored at the 17:14 mark. When all seemed lost for the Raiders and it looked like Union was going to take get its first victory at Starr Rink in a decade, first-year Austin Smith scored the last goal of the game on an extra-attacker goal with 39 seconds left in the third. The Raiders have become accustomed to overtime, as this was the 13th overtime game Colgate played thus far this season. Unfortunately, the Raiders could not break the tie in this one.

Long was simply dominant in this game, making 35 saves.

“I haven’t been feeling too much pressure; if anything I’ve tried to take some pressure off of myself and just focus on stopping one shot at a time and see how it works out,” Long said. “The overtimes haven’t been too bad; it’s only an extra 5 minutes and they can be exciting. It’d be nice to have won a couple more of them, though.”

The following night, which was Senior Night, the Raiders sought revenge for an overtime loss at the hands of the Engineers back in mid-January. Unlike the previous night, the Raiders came out fired up in their last home game of the season. They were all over their rivals throughout the entire period, yet it was Rensselaer who drew first blood at the 15:49 mark.

In the next period, Colgate did not let up their energy and came out with the same fire, seeking to tie the game. They once again completely dominated their opponents. The Raiders finally got what they deserved at the 14:25 mark when junior David McIntyre scored his 18th goal of the season on an unassisted breakaway. Both teams were tied at one with seven seconds left in the second period when a heartstopping moment occurred. R.P.I. forward Garrett Vassel put an awkward hit on junior forward Jason Williams along the boards after Williams released the puck. The uncalled-for hit garnered Vassel a five-minute major for boarding, but Williams remained on the ice after the hit. Starr was eeriely quiet as Williams clutched his head and a stretcher came onto the ice. Thankfully, Williams turned out to be okay and will play this weekend, but the fans became vitriolic after the hit and the Starr Rink atmosphere turned up multiple notches.

The third period of the game was uneventful on the ice, as neither team scored. Colgate once again controlled the play and had the best chances, but it was not enough to avoid the team playing their 14th overtime game of the year. In the overtime period, the Engineers seemed to be holding on to the tie in order to at least escape with a point from Central New York. The Raiders, however, wanted to end the home season with a bang, so they did. Senior Pietro Bogdanich controlled the puck from behind the net and pssed it to McIntyre in front of the crease. McIntyre then scored the game-winning goal with a minute left in overtime, off assists by both Bogdanich and sophomore Brian Day. The team and fans went crazy on Senior Night after the win.

The other architect of this come-from-behind victory, who is quickly becoming a brick wall in net for Colgate, was Long, who has only let in seven goals in his last five appearances and seems to be returning to his early season form at the right time.

“I’ve just had more focus during games; I’ve stopped worrying about everything having to be perfect and put more emphasis on just stopping the puck no matter how it looks,” Long said.

The Raiders will end their regular season this weekend when they take on Brown on Friday at Providence at 7 p.m. Two days later, they will take on the Yale Bulldogs at 4:00 p.m. on a game that will be transmitted by ESPNU. They will then wait and see where they shall travel for the first round of the playoffs.