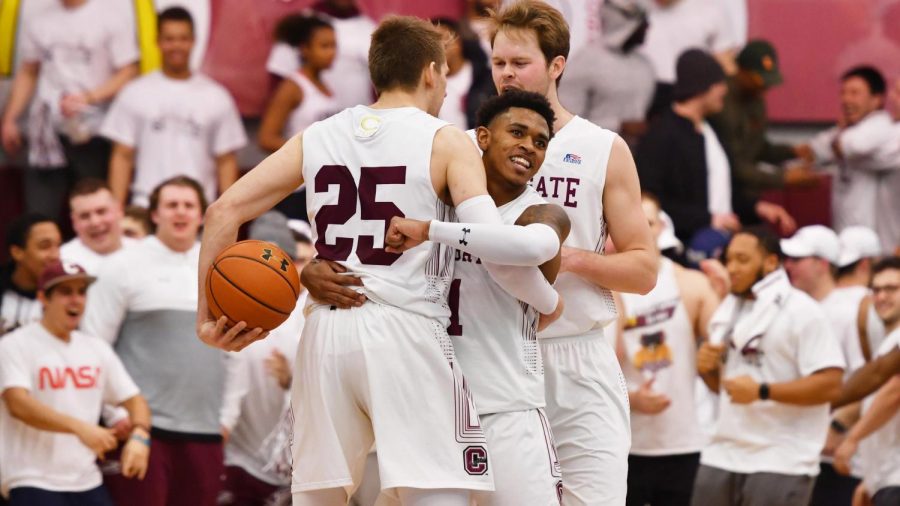 For the second consecutive year, the Colgate Raiders basketball team will open their season against Atlantic Sun Conference opponent the NJIT Highlanders in Newark, New Jersey on November 6.

As Raider Nation hopes, the opening battle in New Jersey will mark the beginning of the road to the March Madness Tournament once again. Last year, the Raiders trailed NJIT by seven with 4:39 remaining before coming back to force overtime.

The Raiders dropped that first contest 81-78, but will look to even the score by taking round two on Wednesday. Following the season opener at NJIT, the Raiders’ slate of competition will feature  some Division I heavy hitters: two ACC teams and one ranked team from the SEC.

“Generally speaking, our number one goal is always to best prepare our team for the rigors of Patriot League play. In doing that, we look for some extremely challenging opportunities at traditionally strong programs from major conferences, but always do so by limiting missed class time,” Coach Matt Langel said.

The three-game road trip, designed to test the veteran Raiders and give them some exposure to top out-of-conference teams, begins in Clemson on November 10.

“Games against teams like Syracuse, Clemson, Auburn and Cincinnati will be great challenges, but also opportunities for unique experiences and memories for our guys, something we believe is also important in the process of scheduling,” Langel said.

The annual away Syracuse game on November 13 will provide a chance for the team to take a pit stop in Hamilton before  taking off for Alabama to face one of last years Final Four teams No. 24 Auburn on November 18.

“Although we prepare for and compete in these games and our other non-league games the same as Patriot League games, there is no denying that the first third of a season is always spent learning and growing towards being the best group we can be in the games that matter the most,” Langel said.

After the most successful basketball season in Raider history since the days Adonal Foyle was throwing down dunks in Cotterell Court and leading the team to consecutive Patriot League Championships and March Madness appearances in 1995 and 1996, this year’s team is returning most of its core and will be looking to add a few new names to the scoresheet.

Key returning Raider roster members feature senior forwards Will Rayman (13.1 PPG, 6.5 rebounds, 0.8 blocks) and Rapolas Ivanauskas (15.9 PPG, 7.8 rebounds, .518 FG%), each of whom started all 35 games for the team last season and averaged over 30 minutes per game. The front court duo has stacked up accolades through three years and the expectation is that they will only improve.

“[Ivanauskas] and [Rayman] will take steps forward this year because they have worked hard to become better players. And not just Rap and Will, but all our guys have. As third- and fourth-year college players, they certainly will both shoulder additional responsibilities of leadership. And that comes in many forms but will be critical for our team,” Langel said.

“Going into my final year at Colgate, I just want to enjoy every last minute that I have in [this] uniform. At the end of the year, I want to be able to look back and say that I put everything I could into this University and help the program continue to grow,” Rayman said.

Ivanauskas, the former four-star recruit according to 247Sports.com, won the Riley Wallace Award (the best transfer in Division I Men’s Basketball) and was named the Patriot League Player of the Year after leading the Raiders in a strong regular season and through the conference tournament.

“I love our backcourt. Jordan and Nelly are talented guys. They are also the best of friends and are excited to be able to play with each other and for each other this year,” Langel said.

The 1-2 punch has been over one year in the making; Cummings transferred to Colgate after his freshman year at Bowling Green, but NCAA transfer rules forced the 6-0’ guard to sit out the entire 2018-19 season.

“I look forward to playing with Nelly this season because it will bring a aspect to Colgate Basketball that no one has ever seen before. We both have abilities to affect the game in a big way whether it’s scoring, assisting, defense, etc. He has a very high motor and strong work ethic that will help the team on our mission to another championship run this season,” Burns said.

With two years of eligibility remaining, Cummings will hope to step in and make an impact from the beginning after waiting his turn and continuing to work during practice.

The fifth starter for the Raiders will presumably be sophomore guard Tucker Richardson, who averaged over 32 minutes per game last year and scored 8.1 points per game. Richardson provides a bit of everything; he averaged 4.2 rebounds and 3.8 assists last year and played a solid defensive game. With another year of experience, the guard should take strides forward in his sophomore season.

Off the bench, the Raiders feature depth that should be willing to be tested. Returning from injury after missing all of last season, senior guard Milan Williams and junior guard David Maynard will aim to earn valuable minutes. Last year, junior guard Jack Ferguson was the go-to sixth man and will presumably assume the same role to begin the season once again.

“Adding Tucker [Richardson] and Jack [Ferguson] as guys who played significant minutes last year and David Maynard coming off his achilles injury, our backcourt will have more depth than ever before and a number of guys who are significant offensive threats,” Langel said.

After finishing 24-11 overall last year and winning the Patriot League Tournament for the first time since 1996 before falling to Tennessee in the Big Dance, the Raiders will look to build on the last three years of success.

Though the skill and depth is in place, the team is aware the day-to-day execution will be vital to long-term success in the 2019-20 campaign.

“Because we have so much talent on our team, we need to find a way to get the best out of each other night in and night out which ultimately comes down to leadership. That is what will help us accomplish the goals we have set for ourselves this season,” Burns said.

The Raiders open Patriot League play against American on January 2; the Bucknell Bison will be in Hamilton on January 20. Until then, the road to March begins next week.

“As long as we continue to take things day by day I think we can do even bigger things than we were able to accomplish last year,” Burns said.

This year is lining up to be an exciting one for Raider Nation. It all begins in Newark next week.