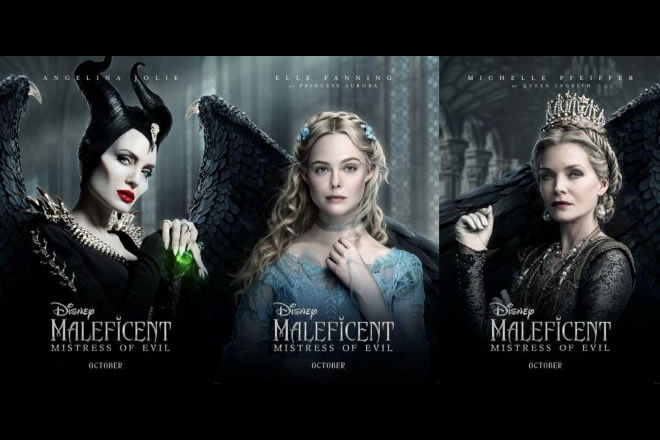 Films featuring infamous villains as protagonists is a becoming a trend in the film industry. The Joker is out in theaters right now, and Harley Quinn’s Birds of Prey is set to come out within the next year as well. A sequel to the 2014 film, Maleficent: Mistress of Evil isn’t necessary, but given its commercial success, why not? The new “villain” concept is intriguing—it provides space for gray areas, something Disney needs more of. Sleeping Beauty is also a childhood favorite of mine, so inverting the traditional story flips fairytale tropes on their head in new and interesting ways.

The movie begins with the wedding between Aurora (Elle Fanning), now Queen of the Moors, and Prince Philip (Harris Dickinson), the least interesting character in this feature. Maleficent (Angelina Jolie) is less than thrilled to hear news of the engagement, but agrees to meet the in-laws for the sake of her adopted daughter. A very tense dinner follows, and chaos ensues after a veiled but aggressive insult on the part of Queen Ingrith (Michelle Pfeiffer). The king (Robert Lindsay) collapses, cursed, and Maleficent escapes. Aurora decides to stay, believing the accusations against her adoptive mother, leading the  future of Moors and human unification to fall farther into the distance.

This is perhaps a controversial statement, but the sequel is a clear improvement to its predecessor. Jolie (once again) carries the movie as the titular character. Her intonation, stiffness and complexity are perfectly captured in her performance, not to forget in her gaze and characteristic appearance too. Pfeiffer was also a pleasant surprise, adding to a larger sense of female empowerment. The dialogue even seemed to improve as it held real moments of wit and humor that I don’t recall being in the first film. Visual dazzle is also ever-present in the film, bringing to life all kinds of fairytale creatures, though not without moments of overly-artificial CGI. All of these elements help contribute to the conflict at the climax, which proved suspenseful and exciting in pace and aesthetic.

While not unforgivable, the resolution given at the end is rather cheap and felt like a Disney cop-out.

Spoiler alert, there’s a happy ending. The film fails to address the effort and difficulties that come with assimilating the Moors with their human oppressors. Disney had the opportunity to display a bit of mature commentary, but they chose to stick with the lightness of a hollow fairytale, and even fairytales when they were written had the intent of keeping children from wandering into the forest or projecting some kind of higher moral take away.

Finally, the most pressing plot hole, what does Aurora see in Phillip? Phillip’s just your average, good-hearted prince with no other defining characteristics. Even the part-time raven Diaval (Sam Riley) is a better, more charismatic suitor than Phillip.

I came into the theater with pessimistic expectations, and walked out proven wrong. Malificent: Mistress of Evil is fun, adventurous, and even thought-provoking at times. It has its flaws, but for the most part they can be overlooked knowing it’s a Disney sequel. If nothing else, you’ll at least find inspiration for costume ideas.