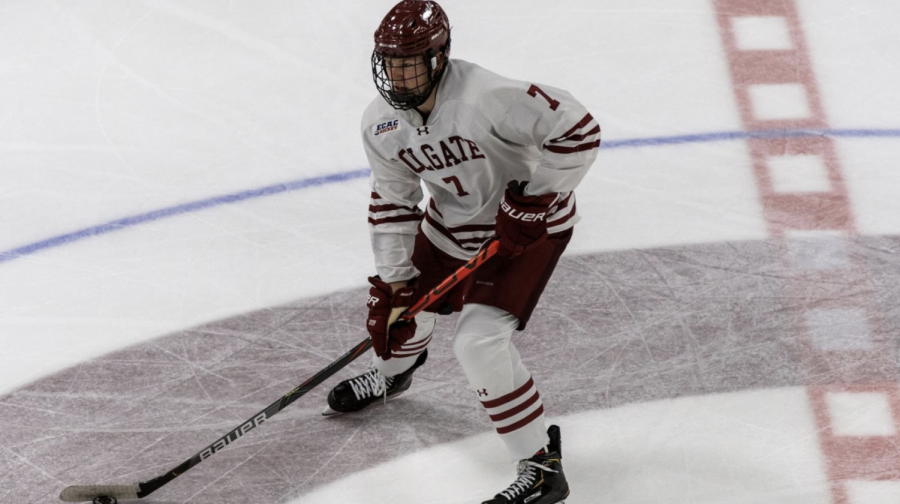 Colgate men’s hockey kicked off their season with a homecoming weekend opener against the Rochester Institue of Technology (RIT) Tigers this past Saturday, October 5. To start the game off, the men’s hockey program commemorated Ron Baker, a longtime Colgate employee and dedicated hockey supporter.

The Raiders had a sold out game for opening night, but the home support was not enough to carry them to victory against the Tigers as Colgate fell 3-1. With 2,278 fans in attendance, this was the first sold out game for the Raiders since January of 2017 when they hosted Cornell.

“I’m very flattered that we were able to help the Baker family. It was great to partner with the fraternities and sororities, and a ton of credit to [senior forward] Ben Sharf for the work he did coordinating it. It means a lot. Generations of Colgate hockey players were influenced by Ron dating back to events in the 80s. He’s touched a lot of former and current Colgate players, so I’m glad that we could do our small part to help the family through this hard time,” Head Coach Don Vaughan said.

The Tigers got up early on Colgate, scoring three minutes and eleven seconds into the game. RIT’s senior defenseman Adam Brubacher managed to swerve through the Colgate defense and put the puck in the back of the net.

As the first period continued, Tigers senior forward Shawn Cameron managed to get a power play goal halfway through the first and another one in the second. After Cameron’s first goal, Colgate answered on a power play.

Colgate’s junior forward Josh McKechney fired a goal with an assist by senior Ross Craig to narrow the gap to 2-1 for the rest of the first period.

Cameron’s second power play goal came about when the Tigers attacked right out of the gate at the start of the second period to increase their lead to 3-1. The Raiders made several attempts to try to tie up the game as Colgate won 29 faceoffs and had 34 shots compared to RIT’s 14 for the night. The aggression increased in the third period as both teams were called for several penalties.

The man up advantage switched between the teams as penalties followed by kills occurred frequently throughout the period. RIT executed a crosscheck and picked up a major penalty nine minutes into the period.

Although the Raiders put pressure on the RIT defense with some good attempts by junior Nick Austen and freshman Matt Verboon, they could not find the back of the net and the game ended at 3-1.

“There were some similarities in our game to last year, but scoring first is huge in any league and they scored on their first shot. RIT got the momentum, then our guys started to press a little just based on where we’ve been. Special teams are rusty, but both our penalty kill and power play need to be better. The difference in the game tonight was two power play goals. We had a lot of offensive zone possession time and I was pleased with that. We threw a lot of pucks towards the net. But when you’re down like that the guys start to press, trying to force plays and are chasing the game,” Vaughan said.

The Raiders will travel to Grand Rapids, Michigan to match up against Ferris State onThursday, October 10 and return home for a game against Boston College on Saturday, October 12.