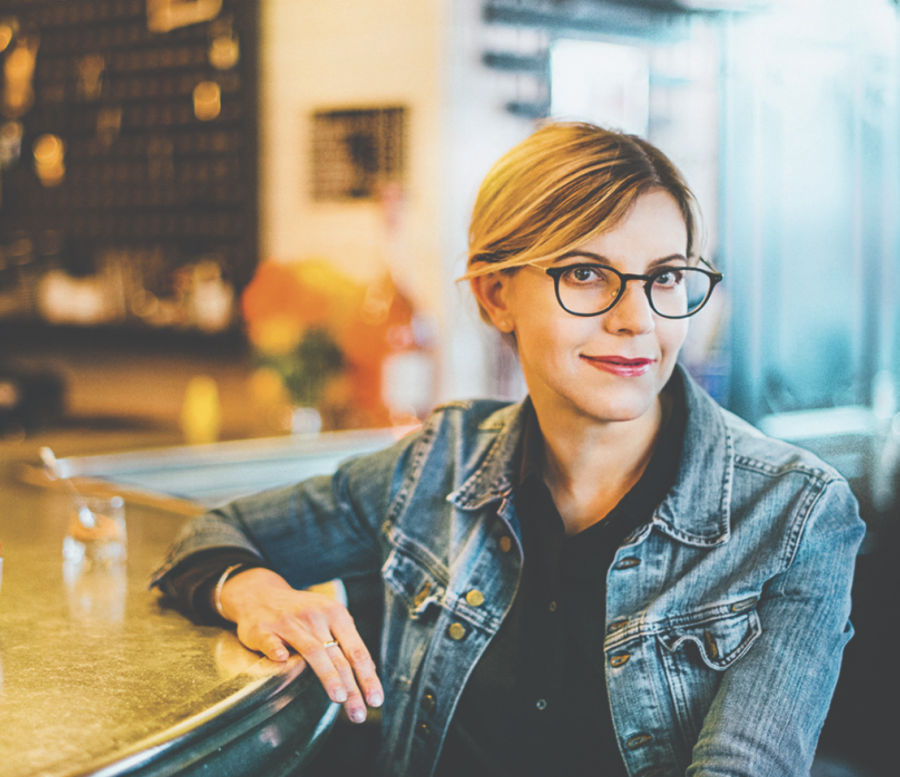 Journalist and 1991 Colgate alumna Pamela Druckerman spoke to students, faculty and community members on Wednesday, October 2 about her journey from being a Colgate student to having a successful career as an acclaimed author, journalist and Emmy winner. Editors-in-Chief of The Colgate Maroon-News and Seniors Kate Hinsche and Ethan Marchetti introduced Druckerman. The event, which also included a workshop with Maroon-News staff in Benton Hall earlier that day, was sponsored by the Political Science department, Career Services and CLSI.

Ed Fogerty, Associate Professor of Political Science and Director of the Academic Program in International Relations, brought up the idea of bringing Druckerman to campus when he was leading a Colgate study group to Geneva, Switzerland last spring. According to Fogerty, he wanted to connect his students to Colgate alumni during their time in Europe, and was put in touch with Druckerman, who spoke to the study group on a panel in Paris.

This event inspired him to invite Druckerman to speak about her work and her journey from Colgate student to successful journalist.

Druckerman graduated from Colgate in 1991 with a degree in Philosophy, later going on to work as a business reporter for the Wall Street Journal. Her time reporting from Sao Paulo, Brazil provoked an excitement she hadn’t felt from her previous work.

According to Druckerman, her time reporting in Brazil invoked a similar engagement to her eye-opening study abroad experiences in Central America and Japan during her time at Colgate.

“Ordinary people had really different stories in their heads about how life is supposed to unfold,” Druckerman said.

Laid off due to a lack of demand for coverage in the area, Druckerman moved to Paris and married a British journalist. Druckerman said she became interested in French culture and its difference from that of the United States after she had her first child. Her work, “Bringing Up Bebe,” centers around the differences in bringing up a child in each country.

Druckerman said this interest in marriage, motherhood and cultural differences prompted her to submit a column to the New York Times, where she was hired as an Op-Ed columnist, a position she currently holds.

“I thought she was a great speaker. She’s very good at keeping the audience entertained, making self-deprecating jokes, but also [having] very relatable stories and connecting it to her own experience [she emphaszied the]broader picture so we could all understand, especially as people interested in journalism and English,” Billings said.

Fogerty said that while he felt somewhat underwhelmed by student attendance, he was pleased by audience engagement and questions during the event.

“I wish there were more students there, honestly. I sort of get how this is a hard sell, when we bring in speakers who are talking about things going on in the world right now, it’s one way in which we at Colgate feel connected with the outside world,” Fogerty said. “And this is a little bit more big picture.”

Drukerman said she feels concerned about the future of journalism, or what she called the “age of distractions.”

“I think this country needs investigative journalism now more than anything,” Druckerman said.

“Journalism has never been so powerful in protecting our democracy.”

“It was interesting to see how she just took ideas and went with them. The fact that she just moved to France and took it from there; I think it shows that a lot of [journalism] is just grabbing at ideas. For me, it was eye opening,” Billings said.

Druckerman said that while a career in journalism was far from what she thought she wanted for her life, it brought together her passions and skills for writing, investigation and noticing cultural differences. She closed with a piece of advice, particularly for students for students in the audience.

“Grow where you’re planted,” Druckerman said. “You will find your place.”