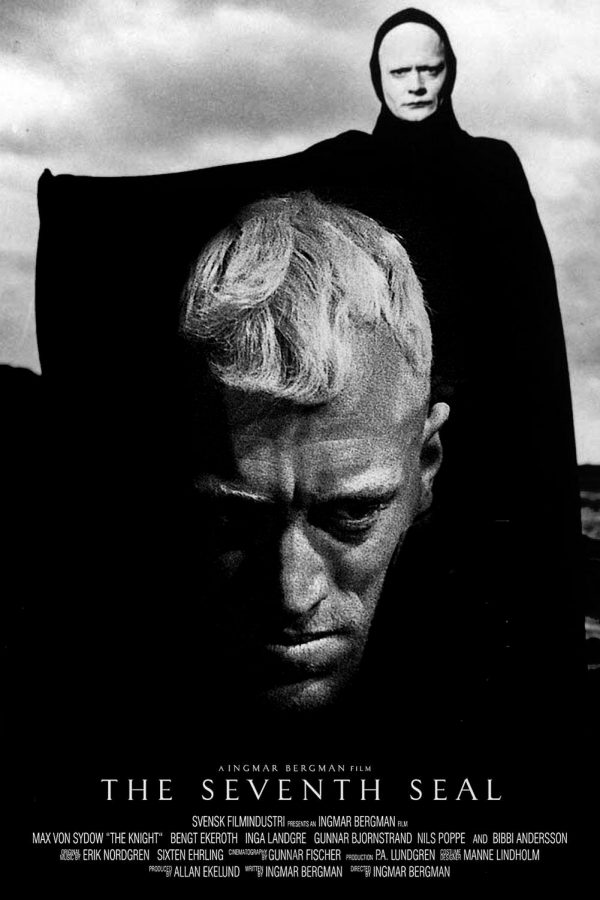 1957 was an outstanding year for Swedish director Ingmar Bergman. Often considered one of the most important film directors of all time, Bergman’s two most influential films The Seventh Seal and Wild Strawberries both came out in 1957 and took Bergman from a contemporary great to a director that is influencing the industry sixty years later. The Seventh Seal is considered Bergman’s opus despite the director, who also wrote the film, having not even been 40 years old at the time of its release.

The film was made at a time of upheaval for Bergman and the questions of faith that the film presents are a constant theme though his later work. During the time of filming, Bergman’s marriage—his third in less than two decades—was on its last legs, and Bergman was dealing with the newfound fame that he had received with the 1955 release of Smiles of a Summer’s Night.

It is also likely that this was around this time where Bergman, a near-decade veteran of the Nazi Party began to feel an incredible amount of remorse for this affiliation, which he acknowledge publicly in 1960. Within all of this turmoil, Bergman gives us a masterpiece of a film.

The film focuses on the knight Antonius Block played by Max Von Sydow who returns to Sweden in the middle of the Black Plague from the Crusades with his squire Jons played by Knut Gunnar Bjornstrand. While camping at a beach along the coast, Block finds himself face to face with death who announces it is time for Block to come with him.

Instead, Block challenges Death to a game of chess for his life. Death accepts the challenge stating that he never loses. This game of chess continues as throughout the movie the two take turns at intervals in the action. Block consistently attempts to buy time so he can perform a “righteous act” as he believes he must redeem himself from the Crusades.

The chess game serves as a backdrop to the madness that has overtaken the country during the plague. Jons finds himself coming to the aid of a traveling actor named Jof, who is expertly played by Nils Poppe in what is one of the best acting performances I have ever seen.

Jof and his wife Mia, played by Bibi Anderssen, join the squire and Block through the forest along with a blacksmith named Plog and his unfaithful wife Lisa (Bergman’s disdain for women comes through in the character of Lisa who is portrayed as manipulative to such an extent it comes across as nearly sarcastic). The journey finds Block attempting to outrun death while also trying to perform a righteous act against the backdrop of the chaos and the religious renewal that times of panic bring about.

The film deals with themes of meaning as well as the divine. The death and destruction that the plague has visited upon Sweden has driven many into the arms of the church, but for Block and Jons it has brought them to question their faith and whether the life they have lived has any value.

The silence of God is a recurring theme throughout the film and the basis of the film’s title (a passage about God’s silence from Revelations). It poses questions of faith in a way that is not overly preachy and instead asks the viewer to consider the answer for themselves.

While The Seventh Seal often feels as though you are watching the ravings of a madman in a crisis of faith, it presents an in-depth look at questions of faith, mortality and meaning in a way that few films dare to.