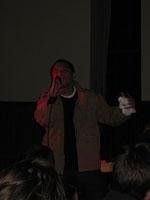 Last Saturday, Seattle hip hop duo Blue Scholars took a break from its tour with Flobots to play a SCOPE-sponsored show that transformed the Hall of Presidents [HOP] from the Add/Drop venue into a concert hall, their multifaceted songs inspiring the students in the crowd to bounce, dance and hoist each other up on their shoulders.??

Blue Scholars, which has opened for the likes of Kanye West and De La Soul and played festivals including Rock the Bells and Sasquatch, is known as much for its funky beats as for its socially and politically conscious lyrics. Its name, a play on the term “blue collar,” aptly reflects its lyrical focus on the economic and political inequalities the working class faces, as well as its calls for youth empowerment. While some of its music focuses on issues in the members’ hometown, Blue Scholars also tackles national issues, and the video for its 2007 single “Back Home,” a call to bring U.S. troops home from Iraq, was widely circulated on the internet.

“I don’t believe I have the answer or that any one small group of people has the answer,” producer and DJ Saba Mohajerjasbi, a.k.a Sabzi, said. “A lot of people in power can shoulder the blame for the world but a lot of people on the ground are to blame, too. The status of the world is something that everyone should be engaged in, and the problem is [that] everyone is disengaged.”

In the HOP, however, emcee and lyricist Geologic (George Quibuyen) easily engaged the crowd, directing the 200 or so students pressed against the stage to wave their arms back and forth, to bounce their hands to the beat and to raise their lighters and cell phones in the air. As Sabzi spun beats that ranged from Green Day’s “Brain Stew” to MGMT’s “Kids” behind him, Geologic tore through the verses of the songs, glowing in the red stage lights. Sabzi and Geologic put their own spin on current hits like MIA’s “Paper Planes,” slowing down and speeding up the beat, and played songs from its own records, making a plug for its 2007 release, Bayani.

?Though the group may be known for serious lyrics, Blue Scholars kept the atmosphere in the HOP light and fun, whether the musicians were rapping about unity in wartime (“Loyalty”) or forgiveness and resilience (“Still Got Love”) and whether the lyrics were about the Berlin Wall or Nickelodeon. Geologic engaged the crowd in call-and-responses, changing up “North by Northwest” to chant “Northeast” and chatted with the crowd between songs, encouraging loud feedback.

Before the show, Sabzi explained that he is constantly looking for new kinds of background beats.?

“I’m starving for influence — not that I can’t find any but I’m hungry for influences. But I want to find something neither me nor anyone else expects to be an influence,” he said. “When I was younger, hip hop was about punk rock, skateboarding, and I wasn’t a skateboarder myself but these things were together in the ’80s and early ’90s. I’m looking for that spirit I felt as a kid.”

?On stage, Blue Scholars was able to combine its youthful energy with their mature messages in a genuine and exciting way. After playing a last song and asking everyone to put their “twos in the sky and say the English word for salaam,” Blue Scholars fittingly walked off stage to the crowd cheering “Peace!” and, of course, “Encore!”

?”I think the show went very well. The people who actually showed up had a great time,”?said SCOPE member and show organizer junior Jake Epstein. “I’m just a little disappointed that the greater Colgate community would rather binge drink at the frats than see a good free hip hop show. I feel like a lot more people could have shown up. It is funny how most Colgate students expect great concerts for Spring Party Weekend, but don’t show up to shows that are produced for them during the regular school semester. I am glad the true fans came and enjoyed the show. ?I know I did.”?

“This was awesome,” sophomore Tim Yeskoo agreed. “A lot of people missed out.”