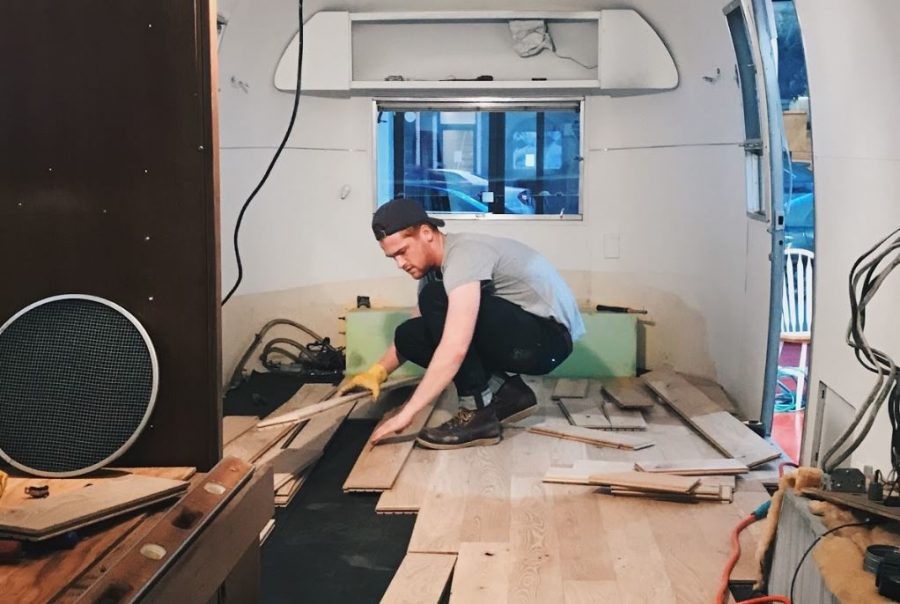 Senior Nick Audrain did not have your average day job last summer. Instead, the Psychology-Spanish double major from Chicago, IL chased a long-time dream. “I had always wanted to take on a large-scale project that would test my creativity, construction, and design abilities,” Audrain said of his renovation of an original 1967 Airstream Overlander Land Yacht. “My father and I also shared the dream of owning a vintage Airstream, but we never had a location to store it because we live in the city, and parking a vehicle of that size requires special permits.”

At the start of the summer, Audrain’s family purchased a plot of land in Buchanan, MI, suddenly creating a home for the Airstream project. On Father’s Day, Audrain and his dad woke up in the early hours of the morning and drove five hours to track down a lead on an Airstream they had found on Craigslist. Worried they were in an Airstream-catfishing situation, they tried to contain their excitement. “Our excitement was warranted. It was perfect and we got it for an incredible deal. The whole drive back I watched the massive silver bullet of a vehicle trailing behind us as we came up with names to call it,” Audrain said.

The work had only just begun. With the purchase of the Airstream, Audrain realized he had only two months to perform a renovation job that normally takes a team of trained professionals four to five months. With a strict schedule and plenty of discipline, he was able to nearly complete the full renovation before his return to school. His one regret? “Next time I’d take more pictures.”

Back on campus, Audrain spends his time as the Philanthropy Chair of Phi Kappa Tau, a member of B.R.I.T.E. Club, an IM soccer player and an avid eater of the Patty Melt at the Hamilton Eatery.