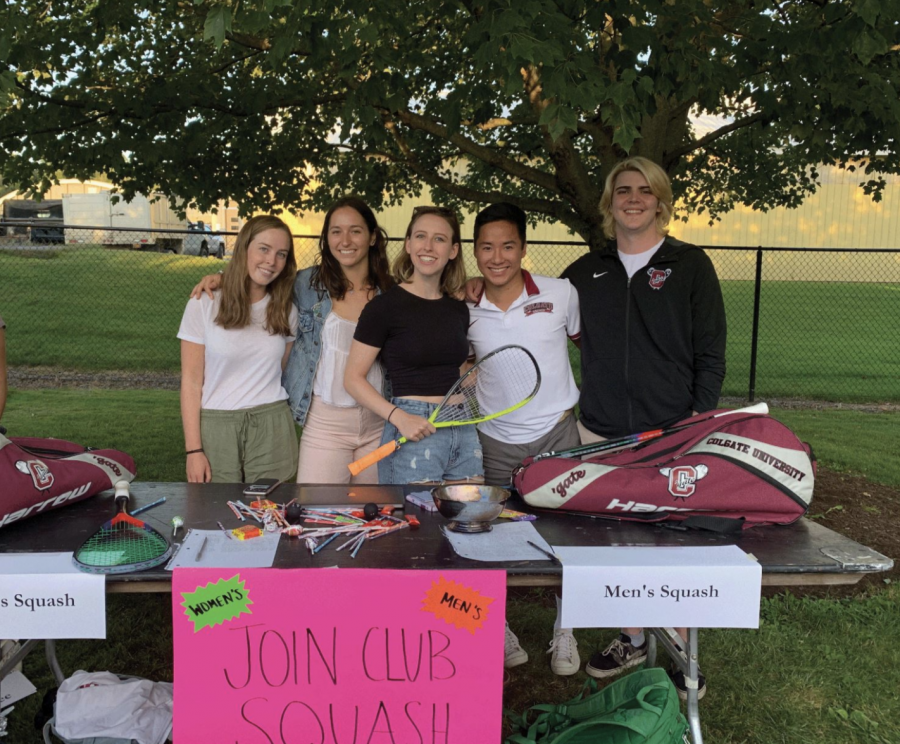 Colgate’s annual Community Block Party introduced the class of 2023 to the university’s various club sports. Held at Beyer-Small ‘76 Field on August 30, the event coincided with a double-overtime women’s soccer game against Columbia University.

Juniors Sage DiGiulio and Julia Lindsey scored for the Raiders and senior goalkeeper Kelly Chiavaro finished the game with two saves, both in the first ten minutes of the game. The match resulted in a 2-2 draw.

The block party is a way for first-year students to become immersed in a student-led group during their first week  on campus. For these club sports groups, tabling at the block party is considered an opportunity to help grow the sport and improve the team.

At the Block Party, club sport team leaders set up tables to recruit students for the upcoming year. Club leaders of familiar sports, such as baseball, water polo and women’s basketball represented their respective organizations. However, there were also

representatives from some of the more unfamiliar Colgate organizations, such as cricket, indoor rock-climbing, martial arts (aikido), fencing and curling. The women’s rugby team set up a table at the block party in an attempt to recruit new students for the upcoming fall and spring seasons.

duration of the block party.

“The whole team was dancing, goofing around with each other, trying to spark up conversations with as many girls that were passing. We sought to recruit first-years and other new players to add to our ever-growing and tight-knit community,” Aronson said.

“The reason we try to recruit as many girls as possible, no matter their experience, size, background, or any other factor, is because we feel that this community is so valuable to those in it and we want others to feel the same way,” Aronson said.

Sophomore squash player Matt Rose also enjoyed hosting a table at the event. Colgate squash had a successful season last year, winning their cup, a 16-team subdivision of all of the country’s squash teams. The team’s two captains, Tom Sneeringer and Michael Malof recruited the majority of the first-year students.

“Our [squash team’s] goal was just to talk to some new students and grow the club’s membership. We had a lot of students come by and sign up. Overall, it was a good experience and the team was able to welcome a lot of new members. It’s going to be a great season,” Rose said.

The block party familiarized first-year students with Colgate’s club sports opportunities and also got them down the hill for the women soccer team’s first home game.