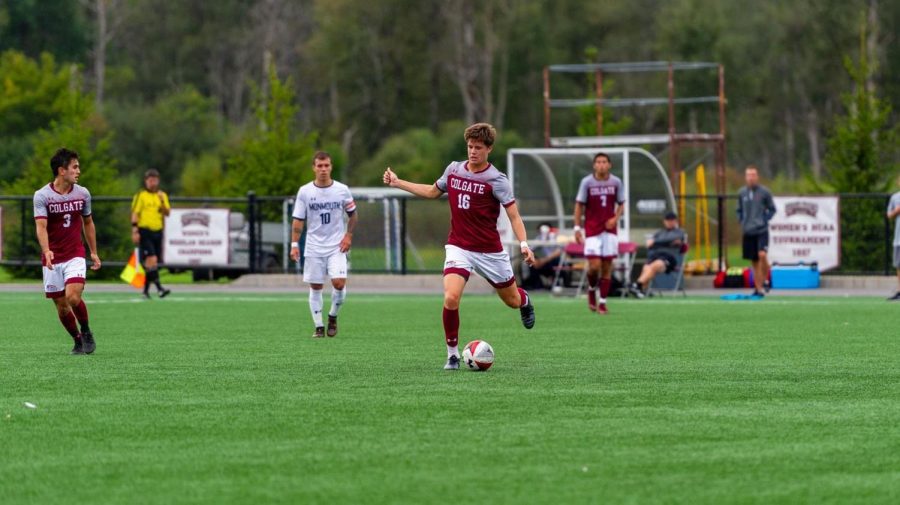 This year for Family Weekend, which took place Friday and Saturday, September 20 and 21, the Colgate athletics teams were all able to take the field (or court) at home. The weekend featured the Patriot League openeing game for the men’s soccer team as well as a tailgate for the football team.

The Colgate Raiders opened the September 21 game against the AP No. 12 Maine Black Bears without junior starting quarterback and pre-season Patriot League Offensive Player of the Year Grant Breneman.

The Raiders were then forced to open the second half without junior backup quarterback Jake Froschauer or junior tailback Malik Twyman due to injuries.

Senior quarterback Noah Rothman stepped in and threw for 125 yards, but these injuries to key players set the Raiders offense back. Colgate’s defense kept the high-powered Maine offense, FCS’s No. 14 ranked offense in yards per game, in check, but the Black Bears’ defense stymied the Raiders’ depleted offense.

In the end, the Raiders dropped their fourth straight contest, losing 35-21. “The offense fought. We had a lot of new starters but they hung in and found a rhythm,” head coach Dan Hunt said.

The Colgate Raiders women’s soccer team opened Patriot League play with a 1-0 loss against a strong Navy team on Saturday, September 21. The loss gave the Raiders a 1-6-1 record while Navy improved to 9-1.

Colgate edged out Navy in shots 11-7, but they were unable to put any past the Navy keeper. The first half was a defensive battle with the first shot not coming until the 29’. Both back lines then rode out the half to remain nil-nil.

The Raiders were aggressive after the break, managing the first three shots after the half, the best chance coming off a corner from sophomore defender Ruby Diodati and a shot from sophomore midfielder Emily Amano. Amano’s shot, however, was blocked before crossing the goal line.

Navy’s second shot on goal proved to be the winner, beating the Colgate keeper in the 57’. Senior defender Leah Lewis almost responded with a goal of her own in the 72’, but her deflected header was cleared from the goal line by a Navy defender.

“We started the game really well tonight. We were able to have an attacking mentality and push forward. Navy is a fantastic team that had momentum coming in. You saw two really well-prepared teams. They found a moment to finish, and we were equal to the task every time. This certainly was not the result we wanted but it was not because of a lack of effort. As much as I hate to lose, there were so many positive signs for us moving forward through league play,” head coach Kathy Brawn said.

Against Lehigh, the Raiders opened the scoring in the second half off a goal from junior forward Taylor Casamassa, which was assisted by sophomore defender Kali Williams and junior midfielder Katie Anderson.

A single goal was not enough, however, as Lehigh tied the game with 4:10 remaining in regulation. Then, with just 1:39 remaining, Lehigh scored the game-winner to pick up a 2-1 win in Hamilton. A strong Syracuse team dashed the Raiders’ hopes to rebound from the tough loss. Syracuse had 15 shots on goal, while Colgate only managed three.

The Colgate Raiders men’s soccer team picked up yet another draw on September 21 against Patriot League rival Bucknell Bison. With the tie, the Raiders open Patriot League play with a 0-0-1 record, moving to 1-2-4 on the season.

Colgate dominated the first half, controlling 74 percent of possession and putting three of five shots on target. The Raiders took a 1-0 lead into the locker room after first-year midfielder Max Edelstein’s first collegiate goal, a header off a corner from sophomore midfielder Kian Alberto. The assist from Alberto marked his first helper of the season.

The Bison opened the second half energized, however, winning a penalty less than a minute into the half. Senior goalkeeper Jacob Harris, once again, showed his immense importance to the Raiders and stopped the PK. A disallowed goal from first-year forward Drew Fischer in the 63’ was quickly followed by a Bucknell equalizer in the 69’.

Regulation time ended with the score knotted at 1-1; double-overtime featured no goals and the match ended in a draw.

“We started incredibly well and played in the front foot from the opening whistle. This is something to build on. Bucknell stepped up their pressure in the second half and we did not respond well. This is something we must learn and grow from,” head coach Erik Ronning said. Colgate will visit Army on September 28 for their next Patriot League game.