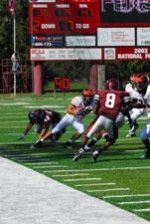 Two years ago, the Raiders lost an overtime heartbreaker to Princeton at home. Over the last two seasons, they’ve lost twice at Cornell in very sloppy games. This year however, the Raiders turned things around, as their offense powered them past Princeton and Cornell during the last two weeks.

Two weeks ago against Princeton, the Raiders got down early when the Tigers took a 3-0 lead on the game’s first possession. On the ensuing possession, Colgate drove down to the Princeton two, and on fourth-and-goal, sophomore quarterback Greg Sullivan found junior tight end Adrien Schriefer in the end zone on a play-action pass to put the Raiders up 7-3. Princeton retook the lead on the next possession when Jordan Culbreath ran in from 15 yards out. Princeton missed the point after, so the score stayed at 9-7. Once again Colgate’s offense could not be denied as they drove 76 yards to take a 14-9 lead. The drive was capped off by two-yard run by senior running back Jordan Scott.

On Princeton’s next possession, Colgate’s defense finally stopped the Tigers when junior safety Uzi Idah picked off a pass from Princeton quarterback Brian Anderson and returned it 43 yards to the Princeton 38. The Colgate offense stalled however, and the drive ended when senior Jacob Stein pushed a 37-yard field goal attempt wide to the left. Princeton took advantage of the opportunity, and on third-and-16 from the Colgate 24, the Colgate defense collapsed because Brian Anderson was able to scramble the entire 24 yards to the end zone to take a 16-14 lead right before the half.

Colgate came out swinging to start the second half and took the ball 85 yards on the half’s first possession to take a 21-16 lead. Once again, it was Scott who finished off the drive, this time with a one-yard run. Colgate extended its advantage in the fourth quarter, when Stein hit a 24-yard field goal to give the Raiders a 24-16 lead. Princeton proceeded to cut the lead to 24-22 on a two-yard pass from Anderson to Bill Mitchell. Princeton went for two and knotted the score up with a pass from Anderson to Will Thanheiser. Colgate drove down to the Princeton 32 on its next possession and went for it on fourth-and-two. However, Greg Sullivan fumbled the ball over to Princeton on the play, and Colgate looked like they were in trouble. But Colgate’s defense came up huge and forced the Tigers to punt from the Colgate 49. The punt sailed into the end zone, and the Raiders took over at their own 20 with 1:10 left. Colgate started off with a three-yard run by Scott, and it looked like they might run out the clock, but after Princeton failed to call a timeout, Coach Biddle decided to air it out. On the next play, Sullivan connected on a 14-yard pass to junior wide receiver Pat Simonds. Then after an incompletion, Sullivan delivered a 21-yard strike to sophomore wideout Doug Rosnick, followed by a 16-yard run by Sullivan. A 10-yard pass to Simonds set up Colgate on the Princeton 16 with five seconds left, and after Princeton used two timeouts to try and ice Stein, the senior kicker delivered on a 33-yard field goal to give Colgate a 27-24 lead with two seconds left. Colgate covered the kickoff well and walked away with a 27-24 win. The kick matched a career-high for Stein and it was his first game winner. He was named Patriot League Special Teams Player of the Week for his effort.

“He’s one of the unsung guys and probably one of our more valuable players,” Head Coach Dick Biddle said, speaking of Stein. “When you look at it he’s somebody that may be indispensible. When he made that kick, he hit it well. There was no doubt when it came off his foot. It was high, straight and he cleared it with room to spare.”

Scott had 116 rushing yards on the day. His two scores made him the Patriot League’s all-time leading scorer with 334 points. Sullivan threw for 204 yards and ran for 70 more. The passing game was much improved from its previous outing against Fordham, when the Raiders amassed just 42 yards through the air.

“We got more balanced and I think we were able to mix it up,” Coach Biddle said, referring to his team’s offensive performance against Princeton. “They were giving us some things in the secondary that we needed to take advantage of. They were sending eight or nine people and leaving their corners out there on an island. We did a very good job of pass protection and I thought our receivers did a great job.”

On defense senior safety David Morgan and first-year safety Vinnie Nicosia led the way with seven tackles. Nicosia was named Patriot League Rookie of the Week for his performance.

A week after the big win against Princeton, Colgate traveled to Ithaca to battle the Big Red of Cornell. Colgate went up early in this one and never looked back. Colgate won the toss, took the ball and scored on a 19-yard rush by Sullivan. After stopping Cornell’s offense and forcing a three-and-out, Colgate drove into field goal range. They couldn’t get into the end zone, but Stein nailed a career-long 35-yard kick to give the Raiders a 10-0 lead. Cornell looked to chip into the lead on their next possession, but a breakup by senior corner Chris Ekpo ended the drive on fourth-and-one from the Colgate 26. Colgate struck again, early in the second quarter, when Sullivan connected to Simonds for a long distance 78- yard strike to put the Raiders up 17-0. Unfortunately, Jordan Scott was injured on the drive after a late hit out-of-bounds and did not return. More bad news came when Cornell took the ensuing kickoff back 73 yards to the Colgate 22. Two plays later, the Big Red was in the end zone thanks to a three-yard pass from running back Luke Siwula to Zach Vredenburgh. Colgate got the last score before halftime when Scott’s replacement, first-year Nate Eachus, scrambled into the end zone from four yards out. David Morgan’s interception of Cornell quarterback Nathan Ford on Cornell’s next possession made sure that the Raiders had a 24-7 lead going into the locker room.

In the second half it looked like Cornell might make a game of it, as the Big Red scored on a Randy Barbour run on the first drive of the half to cut the Raider advantage to 24-14. Colgate though, answered right back when Eachus broke off a 51-yard run to restore a 17-point lead. Eachus picked up his third score early in the fourth to give Colgate a 38-14 lead. Though Cornell got a late touchdown and a two-point conversion to make the score look better, the Big red were never really in it after Colgate’s fifth touchdown and ultimately fell by a 38-22 score.

Colgate amassed a startling 600 yards of offense on the day. On the ground Eachus had 241 of those yards. Before playing at running back, Eachus played linebacker and recorded three tackles and a sack. Eachus was named Patriot League Rookie of the Week for his efforts. All told, Colgate had 345 rushing yards on the day. The aerial assault was in good form as well, as Sullivan passed for 255 yards and a score, as well as rushing for 71 yards and a touchdown. Pat Simonds was his number one target, racking up five catches, 196 yards and a score. The key to both phases of the offensive game was, of course, the guys up front. The offensive line did a spectacular job blocking and allowed no sacks on the afternoon. On defense, Ekpo led the way with 12 tackles, an interception, a forced fumble and two breakups. Though the defense gave up over 400 yards, they made big plays when they had to. They picked the ball off twice, recovered a fumble and forced three turnovers on downs.

“They are a very opportunistic defense,” Coach Biddle said. “In the last four games, when we’ve needed to get the ball back; they’ve gone and got it back.”

Despite only amassing 41 yards on the day, Scott moved to sixth all-time in FCS career rushing with 5,444 career yards. It was also a big day for Coach Biddle, who picked up his 100th career victory.

Colgate will play at Bucknell tomorrow at 1 p.m. Eachus will start in place of Scott, who is out this week with a sprained ankle. Every game is do-or-die for the Raiders at this point, so they need to come away with a big road win in Pennsylvania.