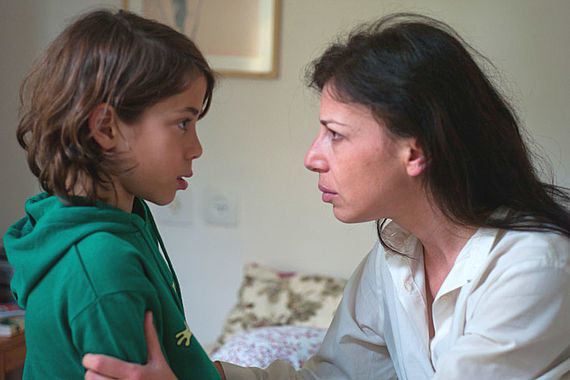 Dana Goldberg’s Alice is not an easy film to watch. Shown as a part of Colgate’s Friday Night Film Series on Sept. 9, the film featured a hauntingly realistic portrayal of the potential struggles of motherhood.

Goldberg artfully moves the viewer through the life of the film’s eponymous protagonist as she navigates her role as a matriarch, a caretaker to others, a lover, and a woman.

Released in 2012 in Goldberg’s home country of Israel, the film picked up three awards at the Jerusalem Film Festival, winning Best Israeli Feature, Best Actress and Best Screenplay. It is, ultimately, through Goldberg’s well crafted script and Ilanit Ben-Yaakov’s ability to so seamlessly step into the role of Alice, that the film truly shines.

As the life of Alice unfolds before our eyes, we bear witness to her multi-layered relationships and the challenges they cause.

There is Eli, her young son who is attached to her at the hip, often seen waking up his mother at the most inconvenient times, much to her annoyance. Alice’s home life is also palpably tense when it comes to her relationship with her husband, Yigal, from whom she is withdrawn and cold. Much of this has to do with her lover, Yoel, with whom she spends many nights away from home. Lastly, there’s her job–the final stressor in her life.

As an on-call nighttime nurse in a rehabilitation school for young women, Alice is confronted with many relationships that take a mental toll. A romance between two of her patients, Neta and Vered, becomes a major storyline in the film as Alice, intimidated by Vered and protective over Neta, attempts to strike a balance between breaking the two up while remaining distant enough so as not to entangle herself in their lives.

It is through these complex interpersonal ties that the film’s theme is revealed: navigating how to give away pieces of oneself to others while not losing too much of one’s own identity in the process. Alice’s roles are many, and her times for relaxation are few and far between.

It is in one of the film’s startling final scenes–a confrontation between Alice and a patient–that Goldberg’s cinematography excels. The way in which it leaves so much to be desired action-wise is striking: we watch the conflict from the eyes of another patient whose view is fixed away from the activity, and yet we are still pulled into the screen, at the edge of our seats waiting to see how the sequence will conclude. It is choices like these that make Alice so extraordinary.

At surface level, Dana Goldberg’s Alice is a film about one woman’s story. However, it is in many ways a film about the stories of a myriad of women, and the pressures imposed upon them in society. It is following a major event in the film that Yigal, Alice’s husband, accuses her of not loving her son, implying that she regrets having him.

Though Alice denies the accusation in the film, Goldberg herself believes the statement holds some truth.

Quoted in The Jerusalem Post as stating Alice’s problem to be that she “has to take care of everyone, but she can’t. The love she can experience and give is limited.”

Alice brings to life the internal predicament that many women face. Society often places the role of domestic and loving on the mother, which in cases like this can leave women drained and void of the emotions society demands from them.

We see how this is the true essence of the film.That is, to both expose the harsh realities of motherhood, especially when it is accompanied by so many other heavy burdens, and also to humanize the role of “mother” in a society that attempts to do everything but that.