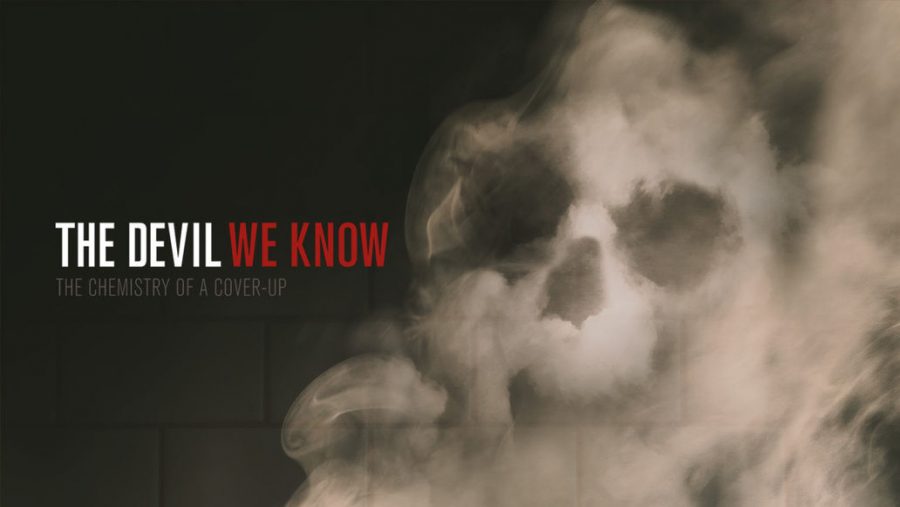 The Devil We Know

As part of its Friday Night Film Series, the Film and Media Studies department screened The Devil We Know on Friday, September 13. The documentary, directed by Stephanie Soechtig, sheds light on a coverup spanning decades by the DuPont Corporation to hide the dangerous effects of the chemical PFOA, which is used in Teflon and many other products.

The film mainly follows the story of the DuPont workers and the local townspeople whose lives have been changed for the worse due to the chemical DuPont used and denied responsibility for. A farmer had his entire herd killed because of contaminated water, despite promises from DuPont that the nearby land would not be used for hazardous waste. A man was born with physical defects that left him hesitant to have a child, fearing the possibility that they would go through the same struggles he did. Countless others suffered from cancer and other ailments as a cause of PFOA. What is even more disturbing is that traces of the chemical can now be found in almost any human in the world, as the chemical has worked its way into many non-stick products and adhesives.

The documentary excels in its presentation of the irresponsibility of DuPont. Facing a class action lawsuit by the thousands of people affected by its waste dumping, DuPont management admits to as little as they can without outright denying facts in their testimonies. DuPont had taken over production of PFOA from the company 3M, who had conducted studies showing the dangers of PFOA in animals. DuPont knew that the chemical would most likely be dangerous to humans as well, but they continued to use it–even when 3M stopped doing so for health concerns.

Through the stories of the former DuPont workers shown in the documentary, it’s clear that their trust in the company was exploited. In documents uncovered from the company, viewers can see that the health detriments to the workers were noted by management, but little was done. DuPont was giving money to schools and the local community all while covertly poisoning them.

“The environment is becoming a more and more pressing issue, but even I hadn’t heard about this before–which is really interesting and surprising considering how widespread it was,”first-year Matilda Zartman said.

The editing of the film paints a bleak image of corporatism. The grainy, almost apocalyptic footage of the farmer’s discolored water and sick, decaying livestock is juxtaposed with montages of happy Teflon advertisements. The black and white color of the ads serves as a depressing reminder that the coverup spanned decades, beginning in the early 1960s. The parts of the testimonies shown are carefully chosen to depict the moments in which DuPonteither begrudgingly admit they knew of the animal dangers or continue to deny its dangers to humans. The contrast between the two highlights how far they went to shirk responsibility.

“The fact that this affects all of us yet isn’t a publicized issue everyone knows about is concerning because we’re all living in the environment together,” sophomore Eric Matt said.

Although Dupont did eventually pay out millions in a lawsuit after a study conducted over nearly a decade connected PFOAs to health problems, it is little in the face of the billions in revenue they make in a year. Although PFOA production ended in 2013, the replacement chemical is another fluorochemical similar to PFOA in structure and results in comparable health concerns. Soechtig’s documentary exposes the staggering amount of damage corporations can do to the public without their knowing.