Art for the Anthropocene: Works by Emily Drummer 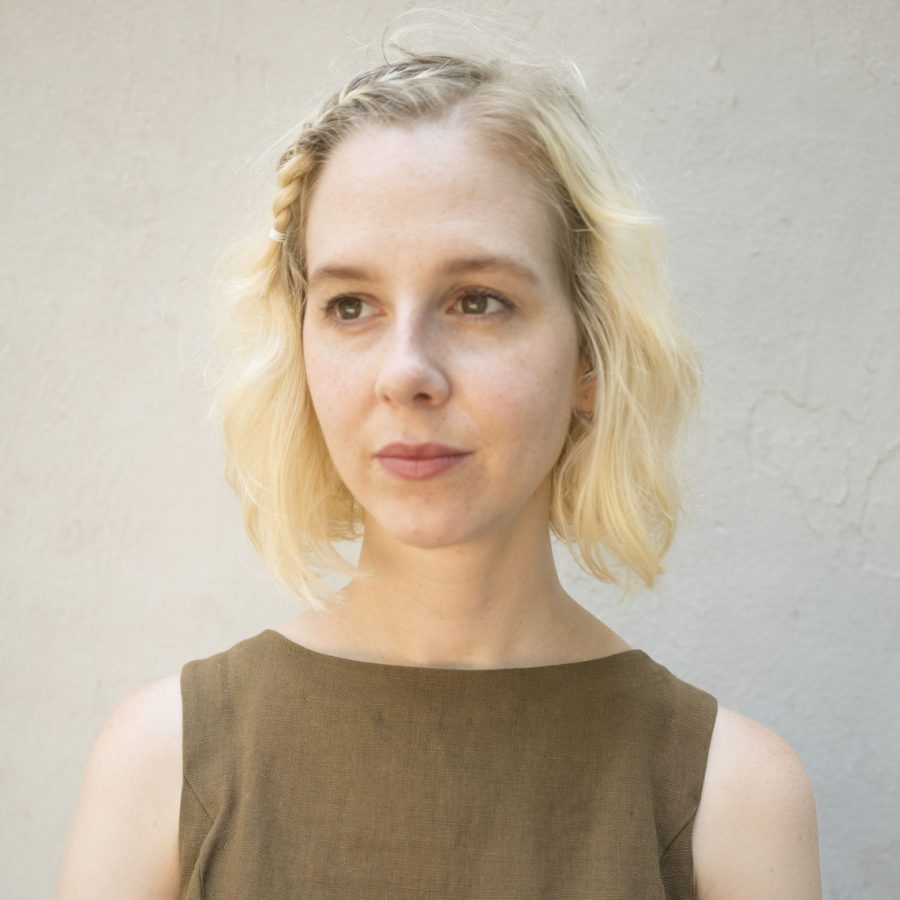 High-speed images of a Halloween dance party flashed across the screen to a soundtrack of repetitive, mechanical noises from an envelope factory on Wednesday, September 18.

According to Emily Drummer, Visiting Assistant Professor of Video Arts, this type of work allows for academic contemplation of a subject or question in an alternative, sensory way. She has coined the term “sensory essay film” to describe her work, as it bridges the gap between arts and scholarship by combining technical analysis with emotional response—striving to deliver a message that cannot be linguistically articulated. This concept was the subject of Drummer’s lecture on Wednesday afternoon, as she spoke as part of this semester’s Art and Art History lecture series.

The dance party in the envelope factory scene comes from Drummer’s “Histories of Simulated Intimacy,” one of two excerpts from earlier works that she screened during her lecture. In her second sensory film essay, Drummer questions how intimacy is altered through physical disconnection—speculating that technologies of long-distance communication create a new form of intimacy possible only by that lack of physical presence or immediacy. In addition to the noises of machines, she uses voice messages from friends, loved ones, and strangers. She takes them out of context and plays them over unrelated images, leaving the audience to make their own connections between sound and image, forming a personal understanding.

Drummer thrives in the gray areas between the humanities and the natural and social sciences. While she has taken different approaches to sensory essay films over the years, what has endured is a dedication to “archival research, theoretical reading and rigorous field work,” as she explained in the lecture. She favors found materials and constructed sounds, undergoing the meticulous process of putting particular visual and auditory elements together for a unique sensory approach to addressing the scholarly question she has in mind.

Drummer’s latest work is a 15-minute film titled Field Resistance, which focuses on the ecological devastation in rural parts of Iowa. The film is political, not because it seeks to deliver a warning or a solution, but because it uses this environmental issue as context for a new kind of sensory exploration. From underground caves, to burning plains, to moss beneath a microscope, the film pieces together different images from conservation centers, herbariums, greenhouses and landscapes across Iowa. It transports its viewers to secret and marginalized places, and in bringing these different locations together, fabricates, “a mysterious ecological research center somewhere in the state of Iowa,” according to Drummer. Remarkably, the film’s soundtrack gives it the energy of a narrative, even though no clearly defined plot exists. Soundbites from radio programs set a tone of banality or alarm, and sighs from off-screen individuals indicate the tediousness of daily tasks. There is also fast-paced breathing to signal urgency, and many droning ambient noises that could be interpreted in different ways—perhaps simulating plant consciousness, for example. None of the sounds used were recorded at the locations where footage was filmed, they were either engineered or collected.

By creating a “narrative energy” with sound and image, Drummer explained that she hoped to craft a more accessible kind of experimental film. This is something that first-year Natella Kurdevanidze, a lecture attendee and student in Drummer’s video art class, picked up on.

“There are a couple films we’ve already seen in experimental cinema, and some of the works I can’t see the meaning in,” Kurdevanidze said. “In this one, every picture had some kind of meaning you could base a story on. Every image makes you think there’s a story far beyond just what you see.”

Sophomore Annika Browning, another student of Drummer’s, also commented on the unique format of the film. “It was abstract and interpretive, which I thought was really cool. It’s something that you don’t get to see a lot of.”

As the issues of the Anthropocene give rise to images and ideas that would have been unimaginable in the past, maybe it’s time for art to do the same. With her sensory video essays, Drummer leaves behind the limits of conventional storytelling, instead generating, “meditative worlds at the intersection of poetry and documentary,”to reflect on the strangeness of our own.