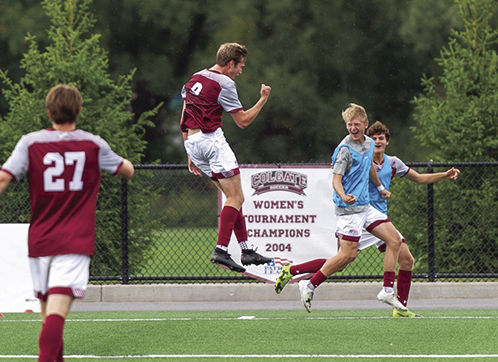 On Thurdsay, September 12, the Colgate Raiders men’s soccer team faced the Albany Great Danes in Albany, New York. The Raiders dropped the contest; a quick start from the Great Danes put the game to bed early. In the first minute, the Raiders were down 1-0 after getting called for a penalty inside the box. Great Danes sophomore forward Austin Dasilva put it by Raider senior goalie Jacob Harris to take the lead. The Great Danes extended the lead when DaSilva and midfielder Hafliði Sigurðarson linked up for a one-timer.

DaSilva then got a brace in the 34’, putting the Great Danes ahead by three goals going to the locker room at halftime.

“We did not get off to a positive start and we were not ready to compete tonight. Our intensity level rose throughout the game, as did our quality, particularly in the second half,” Ronning said.

“I am proud of the fact that we never stopped working to chip away. We will learn from this and move forward,” Ronning said.

The team didn’t let the loss bring them down. On Sunday, September 15 the Colgate Raiders men’s soccer team earned their first victory of the season in a close game against the Monmouth Hawks. With a 2 p.m. kickoff at Beyer-Small 76’ Field in Hamilton, New York, the Raiders were able to pull off the win in a low scoring affair.

“I am certainly pleased to get a result. Our guys always work really hard. This is a pretty young team that had not experienced the feeling of winning a college game together, so I am really happy for them. Every game is a learning experience and we took another step forward today. I am proud of their effort and now we look forward to preparing for Bucknell,” Ronning said.

At the 9:30 mark, sophomore midfielder Kian Roberto took Colgate’s first shot of the game and hit the ball high over the crossbar from long-range.

Freshman Drew Fischer then tried his luck during the 21:53 minute mark from just inside the box, but skied the ball high over the right side of the crossbar.

In the 32’, Monmouth junior midfielder John Antunes hit a strike from just outside the box, only for sHarris to make a sublime diving save.

After the first 45 minutes, the Hawks and the Raiders headed to their locker rooms all tied up at 0-0. The Raiders opened the second half firing. In the 51’, senior defender Christian Clarke sent a header off a corner delivered by Alberto just wide of the net. In the 69’, Fischer connected with freshman midfielder Max Edelstein’s cross, heading the ball high and toward the left of the Monmouth goal but the save was made by sophomore goalkeeper Sean Murray.

Fischer would not be denied, however, as less than two minutes later he broke the deadlock and scored his second goal of the season. Fischer struck a sublime long-ranger off an assist by freshman defenseman Chris Noriega that Murray had no chance to save.

Harris then showed why he is so prized by the Raiders, saving a Monmouth penalty kick in the 80’. The Raiders were then able to ride Fischer’s wonder strike and Harris’ incredible PK save to their first win of the season, the game ending 1-0. The win improved the Raider’s record to 1-2-3.

“It was awesome to get our first win today. Everyone played an important role in holding Monmouth off in the last few minutes. Overall, it was a solid team effort and gives us some momentum as we move into Patriot League play,” Harris said.