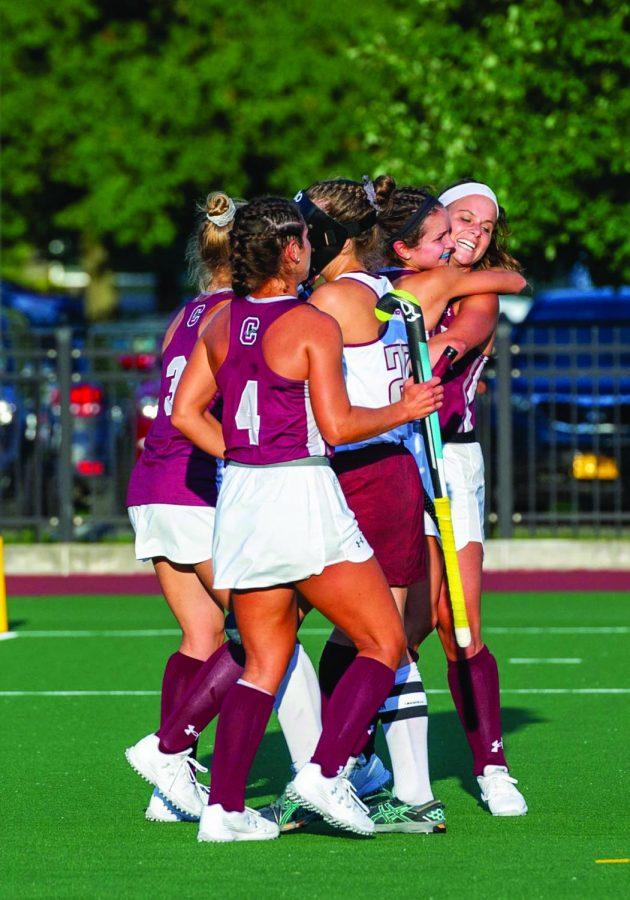 The Colgate women’s field hockey team continued their opening stretch of the season this weekend with a two-game home stand. On Friday, September 6, the team had their home opener, hosting Lock Haven on Tyler’s Field. The Raiders entered the game with momentum having defeated St. Louis 4-1 on August 31 which brought their record to 1-1.

The first quarter was mostly a defensive stalemate as the teams exchanged chances of set pieces with the best opportunities going to Lock Haven, who challenged Raider sophomore goalie Anna Unger twice off corners.

Lock Haven broke the scoreless tie early in the second quarter when they earned another corner shot, as first-year forward Jazmin Palma was able to get her first career goal. Colgate tied the score a minute later off a corner. Junior forward Taylor Casamassa passed the ball to junior Katie Anderson who knocked it past Lock Haven sophomore goalie Joaqiuna Orlandini to make it 1-1. The Raiders were not done though and pushed their way into the lead with three minutes left in the half.

Junior midfielder Meghan Minturn collected a loose ball just inside the left of the shooting circle and hammered one past Orlandini to give the Raiders a 2-1 lead heading into the second half.

The lead, however, wouldn’t stick. Seven

minutes into the third quarter a corner from Lock Haven First-Year Amy Stevens found its way back to her stick eight meters out and she sent a shot past Unger to level the game. The rest of the period was split evenly as Lock Haven managed to get two more shots off on goal and Colgate getting an equally good opportunity as time expired in the period.

With the score tied, it was anyone’s game. Just two-and-a-half minutes into the quarter though, Lock Haven got another corner and a drive in by Stevens was tipped into the net by junior midfielder Prabhneet Basra to give the Bald Eagles a 3-2 lead and the win over the Raiders.

The team’s second game of the week was on Sunday, September 8, with the Raiders hosting Towson. Once again, the game got off to a slow start with both teams struggling to create chances. In the second quarter, the Tigers were able to break the tie with just 19 seconds left in the half.

A corner from junior attacker Heira Bo found the stick of sophomore midfielder Kathryn Parkinson who sent a shot high into the corner past Unger to give Towson a 1-0 halftime lead.

The Tigers’ lead was extended just five minutes into the second half when first-year attacker Geargia Beachley sent one in from the top of the arc giving Towson the lead at 2-0. With five minutes left in the quarter, senior midfielder Nicole Salamone scored to cut Towson’s lead in half before the final frame.

With Towson looking for their first win of the season, chaos broke loose in the final stanza. Colgate leveled the score just three minutes into the quarter when junior midfielder Meredith Rappaport sent one low from the left of the arc to tie the game at two a piece.

The Raiders then took their first lead of the day with just three minutes left in regulation. Salamone was able to find the net to give the team a 3-2 lead and what looked like a sure win. Just 40 seconds later Towson was able to break their scoreless drought and tied the game with just over two minutes left to force overtime.

The overtime period was short lived and the Raiders were quick to celebrate. Junior forward Taylor Casamassa sent a penalty stroke into the bottom left corner to give the Raiders a 4-3 win.

The Raiders move to 2-2 on the season and will be back in action on Sunday, September 15, at Rider before returning home to play Albany on Tuesday September 17 at 5:30 on Tyler’s Field in Hamilton.