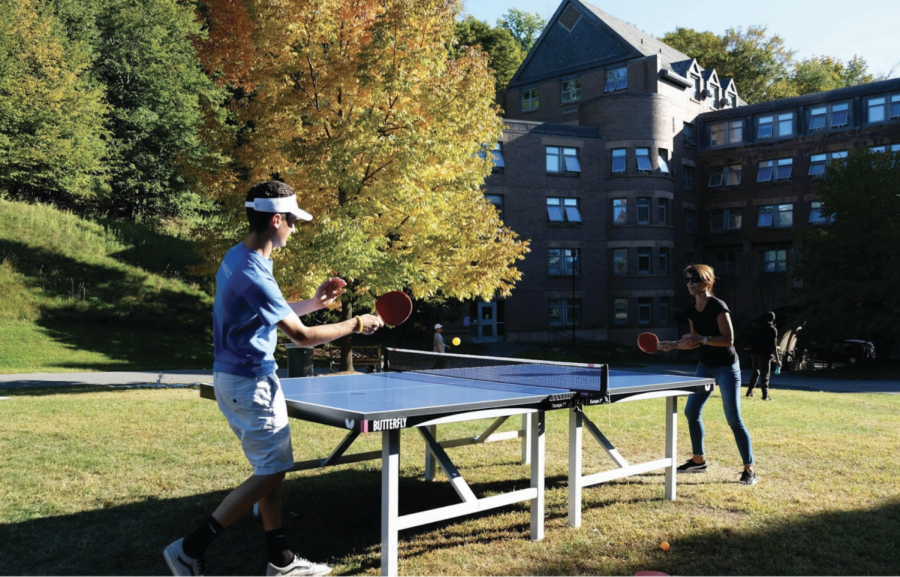 Colgate University held its annual Family Weekend this past weekend from September 20 to September 22. The three-day event consisted of a multitude of festivities, such as open classes, open houses, tours and sporting events.

According to Kelsey Collins,  Administrative Assistant of University Events, the weekend required a large planning effort in reserving locations, purchasing and renting necessary equipment, meeting with vendors, communicating with university departments and preparing a concrete schedule of events.

“Executing large events such as Family Weekend stems from much collaborative planning. Although the University Events team plays a major role in the preparation, many individuals and departments on campus are involved to make it a success,” Collins said. “Our main goal is to ensure all attending Family Weekend have a positive experience.”

On Friday, Family Weekend guests were invited to attend a wide selection of open classes, including “Intro to Computing II,” “Intermediate German,” “Is the Planet Doomed?” and “From Emperors to Anime.”

Other Friday events consisted of a tour of Haven, an interactive session outlining carbon neutrality at Colgate, a creature-illustration exhibition at Case-Geyer Library, as well as open houses for the Center for International Programs, Career Services, Thought Into Action and Fellowships and Scholarships.

Adam Frank, an astrophysics  professor at the University of Rochester, presented his research and discussed his book as a part of the Environmental Studies Brown Bag.

The events continued into Friday  evening, when families could attend a screening of Alice, Shabbat service and dinner, a family barbeque, a rugby parent gathering and an acapella concert with performances by the Colgate Thirteen, Swinging ’Gates, Dischords, Resolutions and  Mantiphondrakes.

President Brian Casey shared that this past weekend represented a new standard for family weekend. He said the whole weekend is structured around a small number of large events to provide space for families to simply be together, starting with the family barbeque.

“We have long heard of families not having made dinner plans, so we wanted to create a comfortable warm place for everyone to just gather and enjoy each other when they arrive,” Casey said. “Close to 2,000 people ended up at that event, which is remarkable.”

President Casey initiated the Saturday activities with a morning address, which was shortly followed by the Family Weekend Tailgate before the football team kicked off against Maine. The Maine Black Bears defeated the Raiders 35-21.

On Saturday, five receptions took place, hosted by the Departments of Religion, Classics, Chinese, Japanese and Chapel House. The receptions coincided with open houses, a department of German luncheon, a tour of the Colgate Community Garden, a faculty panel discussion on politics and an exhibition at Clifford Gallery.

Sunday marked the end of Family Weekend with Catholic Mass, a bagel-brunch hosted by the Jewish Union, a reception for Colgate’s Political Science Department and games played by Field Hockey and Women’s Ice Hockey.

“I was impressed by the outstanding school spirit shown, especially by the parents. Colgate was very accommodating and had our comfort in mind,” Hogan said. “It was also nice that we didn’t have to pay for events and activities, and that there was such a wide array of them to choose from,” Hogan said.

Junior Jared Lampal said his parents did not attend, but he had fun regardless.

“It’s definitely less of a big thing as you get older,” Lampal said. “I really like Family Weekend because it’s fun to meet a bunch of people’s parents…[also], the parent’s barbeque on Friday night was nice. Lots of free food and stuff was set up.”

First-year Abby Hamilton said she had a very positive experience during Family Weekend.

“I had a countdown in my room for how many days were left until family weekend! I took them on an insider tour and they kept saying how pretty campus is,” Hamilton said. “[Family Weekend] was a delightful, rejuvenating time that I needed!” President Casey said he and his team felt very happy with the weekend’s outcome.

“My favorite part of the weekend are often the smaller moments.  I run into a lot of family members on the quads and it is nice to hear their thoughts about Colgate and their students’ experiences” Casey said. “Plus, [Emrys] likes the attention…”