Stein and Lowe Lead Volleyball to Sweep in Boston 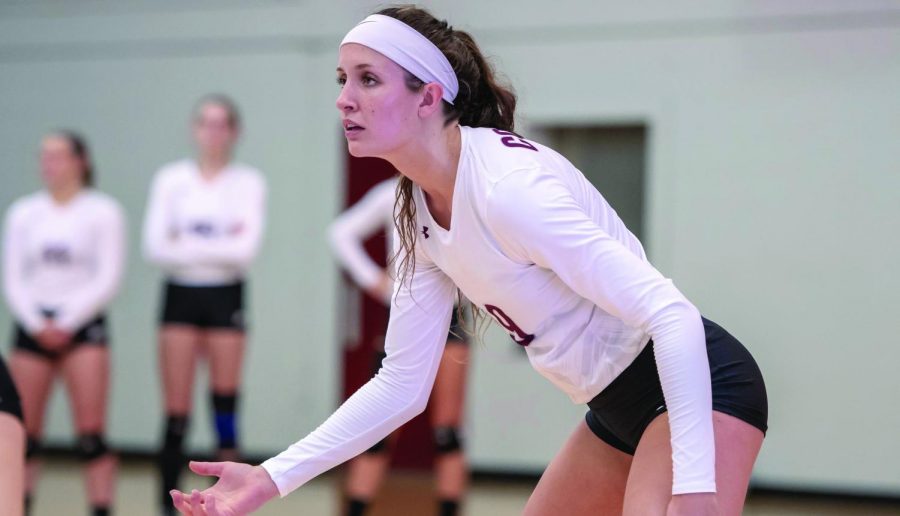 The Colgate women’s volleyball team continued their hot start to the season going 3-0 at the Harvard Tournament in Cambridge, MA over the weekend.

Heading into the tournament, the team was 2-1 with wins over both Marist and Buffalo and the team’s sole loss coming from SEC powerhouse Alabama in five sets.

The team opened up the tournament against Rhode Island. In the first set, the two teams traded points back and forth until reaching 18-18. A series of Ram attacking errors then allowed the Raiders to take a 21-18 lead that they were able to ride out to a 25-20 win.

In the second set, the Raiders came out firing, building a 7-4 lead off a series of poor Rhode Island serves and then matching the Rams the rest of the way, exchanging service and points to maintain a three to four point lead to take the second set 25-21.

By the third set, the Raiders were ready for the kill. After falling behind 6-5 early, the team was able to rally off four straight points to take the lead for good.

Rhode Island was once again unable to get out of their own way, frequently serving the ball out of bounds and into the net. It was a series of offensive errors that sealed their fate.

In the second game of the tournament, which was the team’s first of two on Saturday, the Raiders took on the host Harvard. In the first set, middle blocker first-year Sophie Thompson  led the team early with a series of kills that put the Raiders up 12-11. A series of bad sets and out of bounds returns by Harvard set Colgate up well going into the final stages of the set with a 20-15 lead. The Crimson were able to slightly rally back, pushing the game to within three at 21-18. The team then exchanged points until outside hitter senior Alex Stein had a series of kills that gave the Raiders a 25-21 set win.

In the second set, it looked as though the Raiders had the Crimson’s number down. After falling behind early in the set, the Raiders were able to rally off a 9-1 run to take a commanding 14-8 lead. The Crimson wouldn’t come close for the rest of the set and the Raiders took a 25-16 win to double their set lead at 2-0.

After having started the tournament going 5-0 in sets, the Raiders luck was bound to come to an end and Harvard was able to catch them in the game’s third set.

The teams exchanged blows early, with Colgate managing to take a 14-10 lead that was quickly erased and turned into a 21-16 Crimson lead. The Raiders were able to make up ground and despite facing a match point at 24-19 a series of blocks by Stein and Thompson helped them even the score at 24-24 and force a 2-point win.

Harvard responded however and the Crimson took the set 27-25 to make it 2-1. Colgate came out in set 4 with a renewed energy, but Harvard once again had their number, taking a 9-6 lead.

The Raiders refused to let up though, and fought back to take a 12-10 lead off a series of great defensive plays by setter sophomore Julia Korowski.

Harvard was not able to recover from the blown lead and the Raiders won the set 25-19 to secure a 3-1 victory.

In their final game of the weekend the Raiders took on Sacred Heart.

In the first set, Sacred Heart had the Raiders number as Colgate never lead and suffered a heavy 25-16 loss.

Determined not to find themselves in a 2-0 pit the Raiders worked quickly to build a second set lead going up 7-4 behind a series of kills by outside hitter junior Allie Lowe.

Once again, Sacred Heart was able to come back and pull even. Then, Lowe took over. The junior recorded six kills the rest of the set and led the Raiders out of the abyss to take the set 25-20.

Now just two games away from finishing the weekend 3-0 and extending their winning streak to 5 matches, the Raiders were ready to put Sacred Heart away. Unfortunately, the Pioneers would not wither and once again never conceded the lead in the third set on their way to a 2-1 set lead.

With the game on the line, the Raiders came out swinging once again, led by Lowe and Stein who dominated near the net pushing the Raiders to an early 18-8 lead.

Though the teams exchanged points the rest of the way, the Raiders lead gave them a 25-15 set win and sent the game into a tiebreaking fifth set. Two kills by Lowe gave Colgate a 3-1 lead but that was quickly erased by a Sacred Heart run that gave the Pioneers a 4-3 lead.

With the set tied at 6, Stein had a pair of kills and the team capitalized on Sacred Heart mistakes to take a 10-6 lead that would guide them to a 15-9 victory and a 3-2 win to sweep the weekend.

The Raiders play at home this Friday, September 13, at 6 p.m. in the Ellis Rowland Memorial tournament.