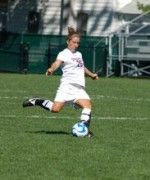 The Raiders were determined to make up for the painful loss at No. 11 Penn State last week and began pressing Hartford from the first minute of the match. Colgate let the shots fly from any distance, and it was only a question of time before the first Raider goal was scored. The inevitable happened in the 29th minute. Senior Franny Iacuzzi received a pass from sophomore Jessica Bitsack and took a shot at Hartford goalie Alexandra Baker. Although Baker made the save, Iacuzzi cleaned up and converted on her second attempt. Iacuzzi, who has eight goals this season, is now only six points away from second-place on Colgate’s all-time scoring list.

The second half began the same way the first had ended. The Raiders were in control and tried on multiple occasions to penetrate Hartford’s defense. However, the Hawks managed to make a few decent attempts on goal. Hartford got a few corner kicks of its own and put some pressure on the Raiders defense. Shortly thereafter the Raiders turned the tables once again in the 86th minute when junior Josie Johnson noted a goal. Head Coach Kathy Brawn was delighted with the hard-fought victory.

“It was terrific,” she said. “The team came out and played well from the start. The players attacked in numbers and defended in numbers, which was what we set out to do.”

The Raiders biggest win of the season occurred a mere two days later when they met archrival Cornell and left no doubt as to who was the better team. A highly motivated Colgate squad possessed the ball for the majority of the first half. The Raiders converted in the 16th minute when sophomore Jillian Arnault received a nice through ball from first-year Calista Victor and fired an accurate shot past Cornell goalkeeper Jodie Palmer.

The second half started with momentum slightly on the Raiders’ side. Shot after shot followed, but it was not until the 70th minute that the Raiders managed to double their lead and shake off the pressure being applied by Cornell. The Big Red tried to break Colgate’s game with frequent fouling, but their aggressive play led them nowhere. Nine minutes later, Johnson scored her seventh goal of the season to write off Cornell’s hopes. The Big Red attempted a final wave of shots to try and avoid a shutout, but it was to no avail. Senior goalkeeper Brittany Pearsall, who had five saves against Hartford and Cornell, was named Patriot League Goalkeeper of the Week for her stellar effort in the net. Brawn was pleased to see progress with the team’s performance.

“It was the most complete game we’ve put together for the whole season,” she said. “That’s a big rivalry and we were on the road. It was an important game.”

The eight teams in the Patriot League are fairly even and it will be interesting to see which one will be at the top in the end. Colgate will host Patriot League rival American on Saturday at 4 p.m.

“American is a very good team,” Brawn commented. “Everyone’s fighting for the same thing. No matter how well everyone’s done so far, it comes down to these seven matches,” Brawn commented. “The Patriot League has become one of the best leagues in the country,” Brawn concluded. “I expect every game to be played with a lot of intensity.”