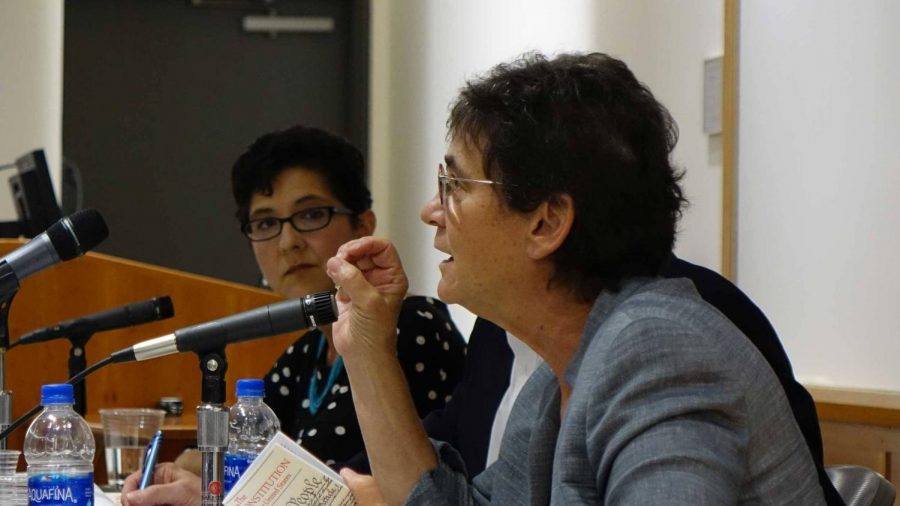 Kathryn Kolbert at the Debate

The Center for Freedom and Western Civilization and The Forum on Constitutional Government hosted a debate coinciding with Constitution Day entitled “Revisiting Roe v. Wade” on September 19. Professor of Political Science Stanley Brubaker moderated the debate between Kathryn Kolbert and Melissa Moschella in Persson Hall Auditorium.

The 1973 Supreme Court case proclaims the legal right of women to sustain abortions in terminating preganancy under the 14th Amendment of the Constitution, according to CNN. Scholar Kathryn Kolbert, advocate for the plaintiff in the 1992 Supreme Court case “Planned Parenthood v. Casey,” stood in favor of Roe v. Wade. Melissa Moschella, author of the Cambridge University Press work, “To Whom do Children Belong?,” defended the anti-Roe side. The debate’s structure included two rounds of equal speaking time for each scholar and time delgrated at the end for audience questions.

Kolbert is the founding director of the Athena Center for Leadership Studies at Barnard College in New York, NY, “a premiere, interdisciplinary center dedicated to the advancement of women’s leadership,” according to Kolbert’s website.

Moschella is an Assistant Professor of Philosophy at the Catholic University of America in Washington, D.C., whose work centers around parental rights, civic education and civic autonomy, largely in relation to abortion.

Kolbert, who is also a Professor in the Department of Political Science at Barnard, said she feels hopeful about her impact on the Colgate students, faculty and community members who attended the event.

“I was impressed by the strong turn out for the debate and the great questions,” Kolbert said. “I am hopeful that students better understand that the right to choose abortion is in severe jeopardy and that electing pro-choice state legislators is key to ensuring women’s rights and health going forward.”

Moschella said she feels positively about her experience speaking on a topic she feels is important, despite its controversy.

“Especially given the current tendency to eschew dialogue and attempt to silence those with politically unpopular views, I greatly appreciated the opportunity to engage in a debate on this important but sensitive and highly controversial topic,” Moschella said.

Sophomore Emma Darcy, who attended the debate as well as a dinner following with the speakers and a group of Colgate faculty and students, said she feels the event brought a diversity of perspectives the campus often doesn’t see.

“When discussing incredibly emotional and polarizing political issues, such as abortion, it is very rare to witness civil and substantive discourse. I found both speakers to be respectful of one another and really engage with the perspective and arguments on the other side, rather than simply reiterating their own personal beliefs without acknowledging the opinions across the aisle,” Darcy said. “I think debates about sensitive topics, more than anything, are necessary at Colgate.”

Moschella said she feels that the event highlighted the importance of respectful disagreement, not just on the issue of abortion.

“I think it is an essential part of a university education to learn the strongest arguments on all sides of an issue, and to learn how to disagree – even vehemently – without taking disagreement personally, and while always treating one’s interlocutor with civility and respect,” Moschella said.