The Facts Behind the Fedora 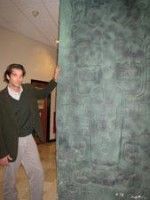 Assistant Professor of Anthropology Allan Maca will be featured on the upcoming Adventures of Young Indiana Jones DVD collection; however, he will not be featured as an actor or as one of young Indy’s companions, but as a consultant and an expert on archeology.

Maca appears in a 20-minute documentary entitled “Archaeology: Unearthing Our Past,” which is partnered in the DVD collection with the first episode of the Young Indiana Jones TV series. The series, which aired in the early 1990s, focused on the exploits of teenage Indiana Jones as he travels around the world on archaeological digs. In the first episode, for example, Indy travels to Egypt, discovers a mummy, becomes involved in a murder investigation and is eventually kidnapped by slave traders. The purpose of the documentary is to give audiences a more accurate and realistic portrayal of archaeologists’ work as opposed to the fictionalized adventures seen on television.

When Maca was first approached about the project in 2003, he was working as a visiting professor at Columbia University just after completing his doctorate. After spending several hours on the phone with representatives from Jak Films, the company producing the collection, he was called into the studio for an interview.

“They wanted someone who could explain what [the archaeologists] were doing, in simple terms that young people could understand,” Maca said, “and I guess I did it well, that they included me as one of three people interviewed in the documentary.”

The other experts in the film are Kent Weeks, a prominent Egyptologist, and Thomas Hoving, the former director of the Metropolitan Museum of Art. Maca stands out from Weeks and Hoving in that he is twenty years younger and works on less glamorous projects.

“They wanted someone who works on the nitty-gritty stuff in archeology as opposed to always on tombs, sculpture, figurines…I was telling them about the importance of garbage dumps, and they thought that was cool,” he said.

He speculated that dozens of archaeologists must have been interviewed, but most likely, the producers were looking for someone young and relatable who conducts research in the western hemisphere.

The documentary focuses primarily on the history, goals and methods of archeology, and includes footage ranging from Howard Carter’s excavation of Tutankhamen’s tomb in Egypt to Maca’s research on the Maya in Copan, Honduras. Maca sees the documentary as being very innovative in that it is the first real attempt by Hollywood producers to portray an accurate account of archeology.

“Basically, Indiana Jones, those movies, always focus on the object. Archeology’s not like that today. It’s focused on the relationship between and among objects. It’s focused on context,” Maca said.

Rather than simply searching for the Holy Grail or the Ark of the Covenant as Indiana Jones does in the movies, modern archaeologists investigate not only valuable objects but also the ordinary objects that surround them in the interest of learning more about ancient culture and society.

“It’s about learning what people did, how they lived, not just the fact that some sectors of society made beautiful things,” Maca said.

Though Maca has no plans to debunk the myths of archaeology by starring in his own TV series anytime soon, he does speak positively about his experiences with the Young Indiana Jones project.

“There’s not a colleague of mine young or old who wouldn’t have wanted to be a part of it,” he said.