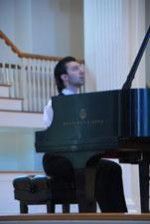 After arriving at the Colgate Memorial Chapel on Sunday, September 23, it was surprising to see that the pianist looked markedly different than the posters hanging all over campus. Wonny Song, was by all accounts stranded in Canada, so the audience was lucky enough to hear the talented Vassilis Varvaresos. Varvaresos had made the last minute trip up from New York City, where he is in his seventh year of study at The Juilliard School, a school for the performing arts, and working on his doctorate.

Varvaresos program consisted of three Chopin pieces: “Ballade No. I in G minor, Op. 23,” “Sonata No. 2 in B flat Minor, Op. 35,” and “Nocturne C- sharp minor, B. 49.” He played “Three Preludes” by Gershwin and Mily Balakirev’s “Oriental Fantasy.”

Varvaresos’ brilliance was present in both the frenzied fervor of the “Sonata” and the mirth of the first and last “Preludes.” His hands moved gingerly across the Chapel’s Steinway piano in the softer pieces. He succeeded in giving each piece the intensity it merited.

Three Hamilton residents in the audience: Connie Lawrence, her husband Greg Lawrence ’67 and Christy Marotz were equally amazed by the Varvaresos’ talents. Lawrence was impressed by the pianists’ selections, which reflective of his wide range of talents.

“The piano is a big instrument, and he is literally making it shake,” Lawrence said.

Varvaresos was an animated player; his upper body moved in time with the music because he was fully engrossed in the performance. Moments of musical harmony would find him swaying as if soothed by the piano’s majesty.

Varvaresos would convey moments of intense strife with impassioned thrashing, his face contorted in agony. He arose to bow after each selection, more tired than the last. It’s as if this journey has cost him, sacrificing a small part of himself for the pleasure of the crowd.

At only 24, Varvaresos has composed music for six short films, among them Howard’s Way, Harwood, Sir John Soane and Ellsworth Kelly: Fragments, and he has written a book, Departure from the Functionality of Syntax.

In addition, he is working on a musical and recently won a competition at Julliard that enabled him to play with the Julliard Orchestra.

With a resume that reads like this, speaking with him could be slightly daunting. Yet, Varvaresos’ ease and charm is evident and comforting. Audience members — mostly Hamilton residents — applauded his skill, expressed their thanks for sharing his gift, and entreated him to come play — an invitation to play in New Orleans, one to compete in Syracuse, several to return to Colgate. All were received with genuine thanks. Varvaresos was impressively humble.

Varvaresos, a native Greek, has only been in the U.S seven years. It’s no surprise that he speaks with the slightest hint of an accent. He began playing at the age of five. His musical prowess was so evident that it would have been ludicrous for him not to continue.

“It was sort of obvious that I should be doing it [playing music], kind of,” Varvaresos explained.

Varvaresos practices between four to six hours a day. He doesn’t have a favorite piece, but simply loves whatever it is he is working on.

“The literature is so vast, there are so many,” Varvaresos said. “Sometimes it’s Brohms and Schubert.”

According to Varvaresos it is difficult for him to remember the pieces and play them without music. Knowing this makes his Sunday performance pretty impressive considering his hour and fifteen minute program was completely memorized.

Varvaresos said he thinks during each piece. In fact, he has a story in mind. He sees colors and images, while trying not to miss any notes. He goes on a journey striving to be technically proficient. His furrowed brow and smiling epiphanies are all part of his internal adventure, it seems.

In the midst of his brilliance, it is clear that Varvaresos is still a student. He recently played a concert at Avery Fischer Hall.

“Yeah, that was hot,” Varvaresos said.

So far he has enjoyed his time with the Julliard Orchestra but he still has another four years before he will complete his doctorate.

Varvaresos is working on developing a thesis. He is looking for a topic that he hopes will incorporate his interest in philosophy with his passion for performance.

As a student of Julliard, he is required to perform three recitals as well as a lecture recital, excellent practice for his future profession. He would like to be a pianist, performing as well as competing. He acknowledges he will probably teach at one point, too.

Listening to the tremendous talents of Vassilis Varvaresos was an absolute pleasure this past Sunday. He is truly skilled and very passionate; he is humble and brilliant in equal measure. Perhaps Marotz said it best.

“I don’t know why the whole chapel isn’t completely filled! Do you know how much a concert like this would be?” said Marotz.

Varvaresos is sure to command top dollar in the future, playing to packed houses everywhere. Now that’s hot.