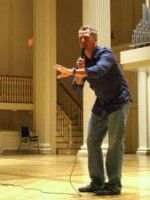 Comedians Andrew Kennedy and Joe Devito were at the Colgate Chapel last weekend as part of Welcome Back Week.

Despite the less than stellar student showing, both comedians were talented. The almost two hour performance passed quickly, offering an excellent start to the year and the perfect reprieve for the prematurely stressed.

Joe DeVito, a Long Island native and veteran of the Last Comic Standing, was up first. He described his life as one plagued by mistaken identity; the be-spectacled DeVito maintains that he has been pursued by people who think he is ‘the Verizon guy.’ The likeness, though not overwhelming, was similar enough to be funny. It set the right tone for the evening, finding a comfortable balance between cultural relevance and the personal anecdote.

DeVito, who remained front and center during his act, also spoke of his Italian heritage. While the ensuing jokes about food were to be expected, his shining moment came in a commentary on loungewear. His observations on the sweat-suited populous were well-timed and his description of his large, Italian uncles dressing up in warm-up suits and loafers was great.

While DeVito easily manipulated the boundary between the politically correct and more audacious, there was a point at which his humor became uncomfortable.

He began to talk about a 1,200-pound man who had gone in for weight loss surgery. The first few jokes were tolerable, but his commentary became too crude. It was the type of humor one feels guilty laughing at. DeVito himself commented on the jokes.

“Watch there be a bit in the paper on what a jerk this DeVito guy is,” Devito said.

Andrew Kennedy, up next, began by telling the audience about the absolute nightmare he’d had in getting to Colgate. He had become lost several times, despite changing the voice of the navigation system in search of a more appropriate speaker. He explained that he wished to be prompted by an intelligent voice while seamlessly imitating varied dialects as examples. Each imitation was spot on and humorous.

By Kennedy’s own admission, he is a storyteller. His comic routine is about his life; a life full of events, which he noted, one really couldn’t make up.

He spoke of his hilarious upbringing. Kennedy’s English father was selling Encyclopedia Britannicas in Colombia when he met and married Kennedy’s mother, the type of woman who no longer questions her husband when he takes a chainsaw to the mailbox.

Kennedy also talked about his well-traveled upbringing, reciting his address in Hong Kong to peals of laughter from the audience. The world travels came to an end in a small Connecticut town. He asked if any one in the audience was from New Canaan, responding to the hands with, “Ohhhh. So you know.”

Kennedy’s skit on a lock-jawed principal was also excellent, and he continued with a flourish to tell stories of his children, their interesting habits, his daily activities and the like.

Kennedy was truly a vibrant performer, using vocal manipulation and an unbelievable talent for mimicry. He was a trained vocalist who ad libbed as Tim Curry and deadpanned inappropriate questions as a Spanish tourist lost in a nightclub – with equal aplomb. He imitated George Bush, Christopher Walken, his British father, and an upstate New Yorker he met on the way to the show with alarming accuracy.

Both Kennedy and DeVito provided excellent entertainment in the Chapel last Tuesday night and the students who were smart enough to attend were well entertained.