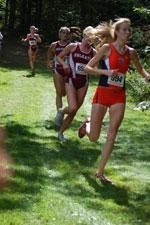 Both men’s and women’s Cross Country hosted and competed in the 13th Annual Harry Lang Invitational last weekend. The two teams had excellent starts to their seasons at the meet, which included races of 4200m and 6000m. Colgate competed against Central New York foes that included Syracuse, Nazareth and Delhi.

Men’s Cross Country finished second in the 4200m to Delhi and third in the 6000m behind Syracuse and Nazareth. Both men’s teams were a mix of seasoned upperclassmen and first-year runners, depending on their readiness for the race distances. In the 4200m, sophomore Lyle Tolli had a huge breakout race finishing first with a time of 14:04. Tolli grabbed the lead early in the race and never looked back, finishing with the third fastest time in meet history.

“I didn’t expect Lyle to run as well as he did,” Head Coach Art McKinnon said. “It was a very nice surprise.”

Senior captain Jeffrey Tufts came in second for Colgate and fourth overall with a time of 14:56, a personal-best by over 45 seconds. Rounding out the scoring in the shorter race were sophomore Jeremy Fisher and junior Tim Drucker, who placed seventh and eighth respectively.

The men’s team also made a strong showing in the 6000m. Led by some impressive first-year runners, Colgate executed its head coach’s instructions to near-perfection.

“Our strategy for the longer course was to run more as a group,” McKinnon said. “We wanted to go out and run as a pack and we did just that.”

Led by first-year runner Ed Sheridan, who finished fifth with an excellent time of 19:58, all Colgate runners were within a couple of seconds of each other one mile into the race. In support of Sheridan was another first-year Raider, Bryan Crowley, who finished 12th. Junior Emmett Weatherford and sophomore Bryan Kretschmer finished 14th and 15th, respectively.

“I thought it was a good opener,” Sheridan said. “It looks like we’re going to have a good pack team, which is a good sign.”

Pack running will be key for the Raiders this year and something that Coach McKinnon will be stressing at every practice and meet this season.

“We haven’t had a group that has been able to run this close together in a long time,” McKinnon said. “Now, we have to make sure that we keep running together, but most importantly that we all improve together.”

The team will have a chance of doing just that on September 15 at the UMass team meet, where they will go up against the host school, Vermont and University of Maine.

Not looking to be outdone by their fellow Colgate teammates, women’s Cross Country, which only competed in the 4200m race, dominated on its way to sweeping the first four places and six of the top seven. Leading the charge for the Raiders was first-year runner Stacey Marion, who crushed the meet record time with a 16:08 clocking. Senior Elizabeth Kennedy came in strong also, securing second place with an impressive time of 16:45. Juniors Kathryn Marvel and Kristen Kiraly rounded out the top four. The foursome secured a noteworthy victory for Colgate, who had only 10 points to Syracuse’s 26 and Nazareth’s 42.

“We definitely have a very strong team, especially up front,” said Head Coach Laura Nardelli. “Now it’s going to be important for our other runners to run as a pack and get better.”

Nardelli made the decision of running her whole team in the shorter race to avoid any possible injuries and keep her runners fresh for the upcoming week, a decision which clearly proved to be the right one.

“I don’t like to have a lot of strategy early in the season,” Nardelli said. “I want to have everybody feel their comfort level and see how hard they can push their bodies for twenty minutes. For a lot of the younger runners it takes time to learn their real limits.”

Nardelli is confident that her top two runners, Marion and Kennedy, will place in the top ten, if not the top five at conferences. Also, she believes that her supporting cast will be able to remain healthy and improve as the year goes on. The next stop for Colgate will be the Binghamton Invitational on Saturday, where the Raiders will go up against Syracuse, Columbia and other Eastern teams.