Baby Talk in the WMST Center 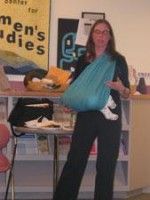 On Tuesday, four of Colgate’s faculty and staff members related their experiences of motherhood at a Women’s Studies Center brown bag lunch and panel discussion titled “Becoming and Being a Parent: Stories of Pregnancy and Parenting.”

Women’s Studies Program Assistant Liz Thompson said that the topic of pregnancy and parenting is a more relevant one on Colgate’s campus than some may believe.

“I have met some students who are parents as well … [but] there are definitely stigmas to being a student who has more responsibility than just to themselves,” she said. This stigma, she said, was the reason that none of these students were represented on the panel on Tuesday.

The four panelists, Assistant Director of the Summer Institute and the Center for Learning, Teaching and Research Doreen Hatcher; Assistant Director of Counseling and Psychological Services Dawn LaFrance; Associate Professor of Sociology and Anthropology and Women’s Studies Meika Loe; and Assistant Director of Alumni Affairs Robin Summers, were all at different stages of their lives as parents. However, they found common ground on certain issues.

Those panelists who had had multiple children noted that each pregnancy brings new experiences. They also spoke about being a pregnant woman in society.

“Your body [becomes] somewhat of a public thing,” Loe said, and told about a time when a stranger approached her outside of a library and asked to touch her stomach.

All of the panelists said that although they did not experience all of the stereotypical downsides of pregnancy, such as fatigue, increased appetite and mood changes, even their close friends and family consistently presumed that they did.

“It’s amazing what people will do or say,” Summers said.

Hatcher, when pregnant with her first child, experienced even heavier stereotyping as a young-looking black woman. She said that, although she was a married woman who had been finished with college for more than a year, many people assumed that she was an unwed black teenager.

“I kept having to assert myself as a grown woman,” she said.

Hatcher’s second pregnancy was also socially challenging, because she had remarried, and her husband had never had a child before. His anxiety over the process, Hatcher said, led him to second-guess her experience and instincts, which in turn led her to do so. She said that, in the end, she wished that she had followed her own instincts more often.

Panelists also discussed the way that people perceived the baby’s gender: LaFrance’s daughter, she said, received clothes as gifts almost to the exclusion of toys, whereas her son received just the opposite. Also, even though Loe and her partner did not want to know the sex of their baby before it was born, while others focused very strongly on it and when Summers was pregnant with her second son, she was frequently asked whether she was disappointed to be having another boy.

In addition to gender, governmental and company policy were also a topic of conversation.

“It’s great that we have [the Clinton Medical Leave Act],” Loe said, “But you also have to take into account the culture of the workplace.”

The other panelists agreed, pointing out the irony in calling a day at home with a sick child a “vacation” day. They also mentioned the trade-off between wanting to fully attend to career responsibilities while also wanting very much to be involved with their children’s lives.

The panel ended with a few words about the medical process leading up to childbirth. The women had diverse views, but Summers summed it up with something they could all agree on.

“I think that health care today is a place where you have to be your own advocate,” she said. “For each woman, it’s going to be different — both your experiences and your choices along the way…[and] chances are, it’s not going to go according to your plan.”