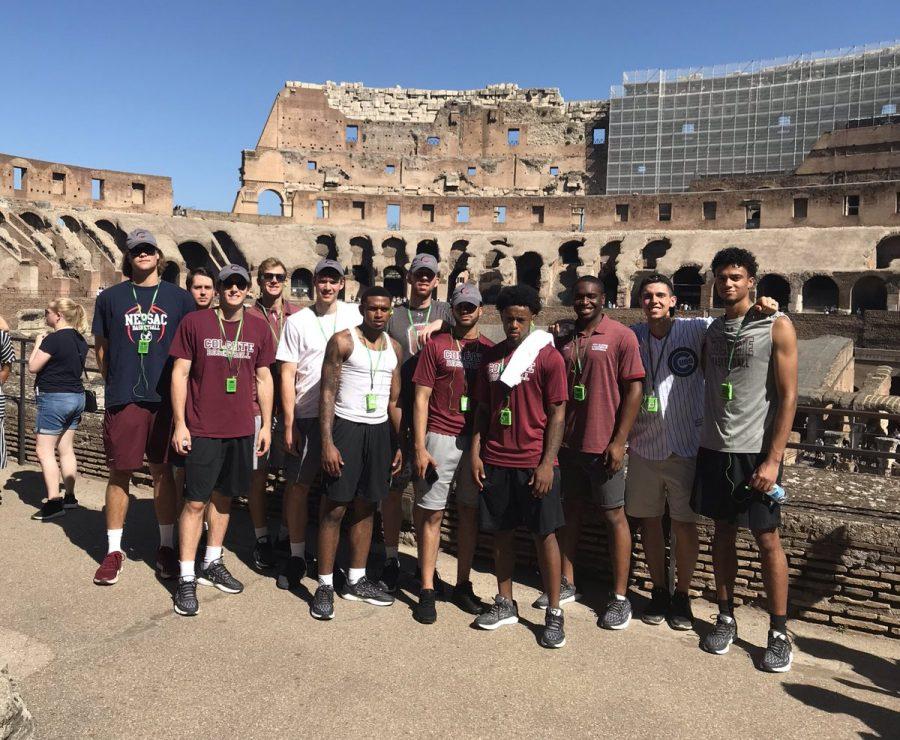 After going 3-0 in its preseason tour, the Colgate men’s basketball team returned from Italy full of momentum and team chemistry.

The trip of a lifetime lasted 10 days, where the Raiders toured Rome, Florence, Pisa, Cinque Terre and Siena. There was a different scoring leader in every game for the Raiders, with senior forward Will Rayman leading the way with 23 in the first exhibition, junior guard Nelly Cummings with 22 in the second and junior guard Jack Ferguson with 20 in the third.

“The time on the court before the trip and playing a few games certainly served to help us learn more about a few of our new faces and what some of our group’s strengths and weaknesses may be in the year ahead. But most importantly we had the chance to come together in a foreign environment and that will serve to strengthen the bonds and friendships of the individuals among our program,” head coach Matt Langel said.

The trip to Italy helped to build chemistry in preparation for the new season. With the first foreign trip since 2015’s trip to Spain, the Raiders were able to incorporate the new faces that will be featured in this year’s squad.

“It was a great trip for our team leading into this school year. We all learned more about each other and we were able to play some games and work on our chemistry on and off the court. We visited five cities: Rome, Florence, Pisa, Cinque terre, and Siena. We toured all and had some good food along the way. Overall I think this trip helped us become a closer family and also helped us in continuing to grow the culture and tradition we are trying to build here at Colgate,” junior guard Jordan Burns said.

The Raiders are returning most of their key pieces from last year’s squad. One of the pieces that won’t be returning, however, is guard Francisco Amiel. The class of 2019 graduate signed his first professional contract for Sporting Club de Portugal. Sporting CP will field its first basketball team in 20 years in the 2019-20 season.

“It feels good to sign my first pro contract. It’s my soccer team as well, which makes it a little more special, but it’s good to be able to keep growing in a team whose responsibility is also to work everyday with the sight of winning a championship, just like it was in Colgate,” Amiel said. “Being back home, back to family and friends, even if it’s just for 1-2 years, is also pretty exciting and is something that I will cherish a lot as I approach this upcoming season and challenge.”

The Raiders’ expectations for the season are high following a March Madness appearance last year, pushing top-10 Tennessee to the final minute, as well as the Raiders first Patriot League championship in 23 years and its best season in program history. Colgate has a strong non-conference schedule this season, featuring four away contests against Auburn, Clemson, Syracuse and Cincinnati. That said, the Raiders will look to open their season on a positive note on November 6 against the NJIT Highlanders.