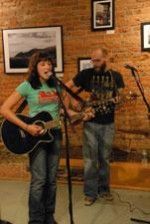 Last Saturday, September 22, the Barge Canal Coffee Company held its weekly Saturday Nite Music Series from 8 to 10 p.m. People came, grabbed a coffee and maybe a slice of pie, and pulled up a chair in the comfy Barge setting. During that time, there were two wonderful performers.

First up was Jen Abounader, a grad student from Albany, New York. Abounader has been playing acoustic guitar for seven years, before which she played the bass. Her songs are folksy, somewhere between Michelle Branch and Jewel, with provocative lyrics reminiscent of Alanis Morisette. She writes all of the lyrics herself.

Abounader’s songs were sometimes very mellow and slow, but at other times would crescendo significantly, seeming to convey much emotion. Her lyrics, with lines like, “Nothing lasts forever when forever never comes,” were incredibly deep, and appeared to come from personal experience. One song Abounader played was called “The Ballad of Roy Wickford”. She explained beforehand that Wickford is a friend of hers who sometimes has trouble talking to girls, and that she wrote the song to encourage him.

“She sounds a lot like Sinead O’Connor,” Tony George, a member of the audience, said. “Her voice has that deep sound that reminds me of [O’Connor]. She was very good.”

“I liked the fact that she wrote her own lyrics,” Davidow said. “It takes a lot more talent than just singing alone,”

After Abounader’s set, she and the second artist, Brad Tilbe, sang several songs together. Some of the songs they sang were: a new song by Link Elliot, a song Tilbe explained, “always for Jackie, whether she’s here or not”, and an original song with lyrics by Abounader and music by Tilbe. The two musicians seemed to enjoy their collaboration, and even though they made a few mistakes in their songs, they persevered.

The night ended with Tilbe’s set. Tilbe is an acoustic guitar player from Utica, New York. He had a very unique sound, with a higher, raspy voice, and often slow and mournful elements in his songs. Tilbe played several covers, including “Working Class Hero” by John Lennon, a song by Paul Westerburg, and “In My Own Time” by the BeeGees.

His lineup was an eclectic collection of very different sounding songs that kept the audience interested. Like Abounader, Tilbe was quite a personable performer. At one point he told the audience that he loves Hamilton, and would move here if there was a music store in the town.

The listeners all had good things to say.

“I like their choice of covers,” said first-year Francesca Gallo said.

“They both used to play in my coffee house in Utica, Virgo Bat’s Coffee House,” Gary Ingraham added. “We’ve been big supporters of them for a long time — about six years.”

Abounader and Tilbe were very well received by the audience, and seemed comfortable in the cozy setting provided for them. Surely, the Hamilton audience would welcome another concert coming to the area.