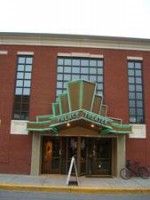 The Palace Theater has undergone a number of changes in the past year, the most notable one perhaps being the entrance limitation resulting from two violent incidents involving students from another university. However, the newest change to the theater, the hiring of Patricia von Mechow as the new Program Coordinator, may overshadow any other recent ones.

Von Mechow’s new ideas and agenda aim to get the Hamilton and Colgate communities focusing again on the performances at the Palace instead of the incidents that occurred over the past few years. Von Mechow will be working with Colgate-related programs and offering students help with development, implementation and promotion. She is also working to develop community-open programs such as the new ONStage! series starting this year.

The ONStage! series is a group of live performances, from comedians to dance troupes, coming to Hamilton from the local, regional and even national level. Von Mechow was very enthusiastic and excited when speaking about the different groups coming to the Palace.

“This year is a test run for us,” she said. “We’re focusing more on lighter entertainment, performances anyone will enjoy and will walk out from feeling upbeat and positive. We want people to want to come back, and as they do we will be able to get more of a feel for what they like so we can add on to our repertoire of performances for future years.”

The ONStage! series is the perfect way for students interested in theater to be exposed to national and professional performing troupes. There are volunteer opportunities offered for each performance, from lighting and tech to selling tickets and concessions.

“A goal of mine is to have the student groups interact with the professionals enough that they could eventually come to the point of being able to perform with them,” von Mechow said.

One of the first student organizations the Palace will be working with is the African, Latin, Asian and Native American (ALANA) Cultural Center. The Theater would like to see a cultural performance group utilize their newly renovated basement, formerly the student-run Chili Willy’s restaurant, which is now known as “The Underground.”

“The Underground is a really cool, intimate spot that would be perfect for a small performance group or solo performer,” von Mechow explained. “It’s an awesome environment because the audience can really connect with the performer in such a small setting. That’s what live theater is all about, that electricity and energy flowing from the performer to the audience and vice versa. Both parties and the performance itself thrives on the rush that they get.”

One of the main things von Mechow hopes that the ONStage! series does is continue to strengthen the relationship between the Colgate and Hamilton communities. The Palace offers a safe and comfortable environment for students and locals to enjoy and an opportunity to bond over a hilarious or awe-inspiring performance. The series is open to the public and is marketed to the entire central New York population.