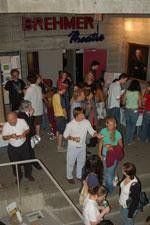 It’s been a long time since I felt motivated to see a show at Colgate more than once. Perhaps it’s a result of working on a show that by the time tech work is over, I could happily never see the show again. Perhaps.

But I didn’t just see Dmitry Krymov’s Sir Vantes Donky Khot a second time; I saw all three performances. I was sitting on the edge of my seat each time. I can’t remember ever feeling so excited and moved by a show. There was always something new to see, details missed the time before, a different take to ponder. Even having seen the play three times, it still has the power to move me.

The definition of a classic is sometimes given as “a book that everyone wants to have read, but no one wants to read”. The thing is classics are enduring for a reason; something in them resonates through the years and across miles.

And when you do get around to reading one of the classics that has been sitting untouched on the shelf for years, the first thing you have to do is brush the dust off.

Which was exactly what happened last weekend to begin Sir Vantes Donky Khot.

The show began with sawdust. It was everywhere in, on and around the performers, pouring out of shoes, jackets and suitcases, spread inches deep across the stage, and before the story could start, it had to be shaken off. Later the sawdust became part of the set.

Like so many of the classics, once it started, it became impossible to put down.

Donky Khot was inspired by Cervantes’ classic, but it was not limited by it. Donky Khot was Don Quixote and Gulliver in the land of the Lilliputians and Icarus flying into the sun. He was a poet and a romantic, an idealist and an outcast, a buffoon and a science experiment. He was an idea.

Part of the beauty of the play was that it you weren’t explicitly told what was going on. It was up to the viewer to figure it out. There was layer upon layer of meaning, each viewing revealing new depths, the very nature of the play allowing each person to come away with the things most poignant for them.

Lights, set, props, costumes — none were complex. The set was largely sawdust and cardboard. What props there were looked as if they could have been made or found, perhaps in a cluttered attic or basement. The costumes must have been made for the show, but they were more utilitarian than decorative.

The lighting was simple, using only a handful of instruments, but achieved some amazing effects. All the aspects of the show came together beautifully to present an impressive and penetrating portrait of a man that is every one of us, and the music pulled everything together, setting and enhancing the mood.

The highlight of the show was the shadow theater that followed the first time Donky Khot was killed. Set to music and thrown into sharp relief, his corpse was taken behind a screen where his skeleton and psyche were dissected and examined in a stark, ever changing perspective. It was a breath-taking effect, funny, engaging and interesting. The epitome of the show as a whole: it was simple to accomplish, but amazingly deep.

Sir Vantes Donky Khot was tragedy, comedy, history, romance, classic and a giant psychology experiment all in one. The moral of the story was different for everyone, but for me the play spoke of the Don Quixote in all of us.

If we open ourselves up to the possibility and creativity we may become more alive, more of a person, than everyone around us.