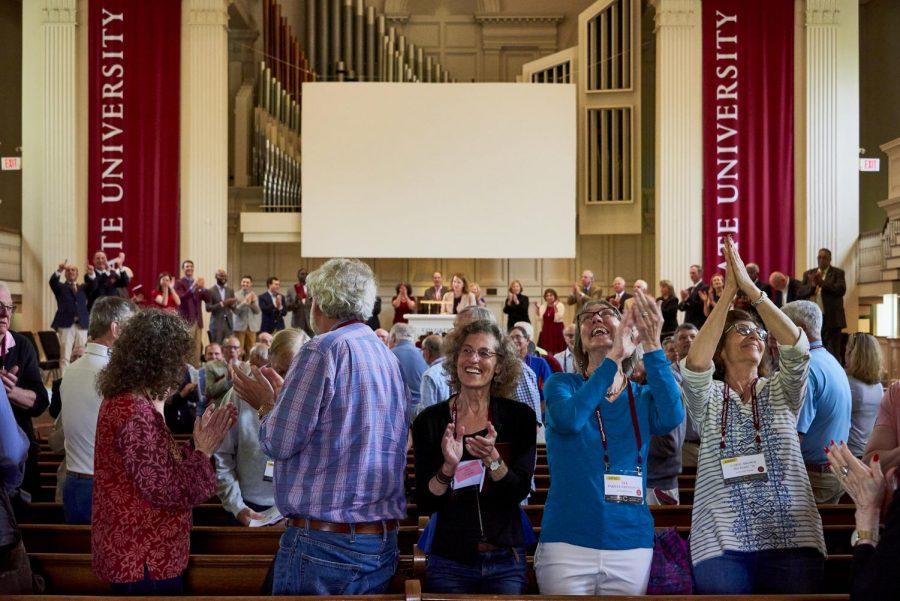 The university celebrated Colgate’s Bicentennial Reunion May 30 through June 2, drawing nearly 5000 alumni, family and friends across many graduating classes to campus. The three-day event required the combined efforts of the Alumni Relations Office, the Special Events organizers, the Advancement Division and a team of approximately 50 student workers.

“The Alumni Relations Office started planning for the All-Class Reunion several years ago, knowing that this was a special year and opportunity for Colgate. All alumni are always welcome back for reunion but we intentionally invited everyone to return to campus for the bicentennial celebration,” Mansfield said.

ALANA Cultural Center’s 30th anniversary coincided with the bicentennial reunion, where alumni celebrated the cultural center’s recent tree dedication outside Olin Hall during the weekend. Members of Konosioni recognized their 85th anniversary during the torchlight procession led by President Brian Casey. The Alumni Council marked their 100th anniversary with a luncheon, and multi-era members of the all-women a cappella group, The Swinging ‘Gates, rejoiced in their 45th anniversary with a concert at the Colgate Memorial Chapel.

Swinging ‘Gates leader Senior Taylor Jaffe said that 80 returning alumni joined the current ‘Gates to sing in the stairwell of the Hall of Presidents within James C. Colgate Student Union.

“The stairwell was packed,” Jaffe said. “It was really cool to hear [the alumni] sing older songs or songs we didn’t know. Like, we’d ask ‘What’s the Canadian national anthem?’ and they’d just sing it.”

President Casey’s Saturday morning address on Colgate’s third century signaled the nearing close of the reunion. The Third-Century Plan aims to ameliorate the established Colgate framework of inclusivity, intellectual rigor, and initiative. First steps included the elimination of loans for students coming from families with an income below $125,000, and the inclusion of Robert H.N. Ho Mind, Brain, and Behavior Initiative.

Senior Eamon Reynolds, who spent the summer on campus as a chemistry researcher, said he had a positive experience interacting with alumni at the reunion.

“I got to run into a recent alum who used to work in the same lab that I now work in and he gave a talk on campus, which was cool. I also met an alumna who was on one of the earlier Dijon study abroad programs, which I also did, and she married some guy she met during the trip. The older alumni all wanted to give me life/career advice most of which was actually quite good,” Reynolds said.

Senior Eric Fishbin, who worked as a summer intern in the Office of Admission, echoed this sentiment. Fisbin said his experience exemplified the camaraderie between the past and present Colgate students.

“Sneaking into a party at 110 Broad St. (the old DKE house) with lots of alumni pretending they were still in college was both very fun and very funny. The overall spirit was pretty palpable. We hear a lot about how much the alumni community cares about this place, so to see the crowds turn out for the celebration on campus was cool,” Fishbin said.

Mansfield said he felt the Bicentennial Reunion both created and reanimated memories for students and alumni alike, and that 200 years of Colgate has made for a strong foundation on which to build upon for the future.

“At its 200th anniversary, a place like Colgate needs a moment to honor its past with dignity, a moment for its alumni to share space together and touch the campus, and for everyone to hear the call ahead,” Mansfield said. “It was a resounding success that sets us up for the next century.  I’ve worked at Colgate for over eighteen years and the All-Class Reunion was the most special weekend ever.”