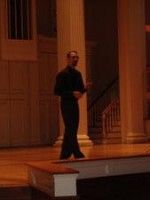 Organ shutters slid open and shut as Glenn Kime began his opening piece, “Adagio and Fugue in C minor” by W. A. Mozart, on the Franklin G. Brehmer Memorial Organ in Memorial Chapel on Saturday at 5:30. Despite the fact that this is only Kime’s second year teaching organ at Colgate, during his first full-length concert the lower level of the chapel was nearly full as the organ’s 2,800 pipes, occupying most of the front wall of the chapel, reverberated with sound.

“I really like playing loud, aggressive music,” Kime said during the concert.

Much of what he played was just that, including many pieces that required him to shift to reach the organ’s many pedals and keyboards, as well as one piece he played almost entirely with his feet.

“Some of these pieces are my favorites,” Kime said.

Kime stopped playing for long enough to explain why he chose each piece. These explanations included many stories that drew chuckles from the audience and a more serious explanation of the piece dedicated to Mary Ann Dodd who was Colgate’s university organist from 1973-1993.

Dodd was involved with the procurement of the organ, as well as partially responsible for Kime’s initial fascination with Colgate’s organ. He attended concerts at Colgate for many years before he arrived as a member of the faculty.

The title of the concert, “The Magnificent Holtkamp,” refers to the designer of the organ, Walter Holtkamp. Kime cited the uniqueness of the organ as reason for this choice:

He also cited the recent thirty-first anniversary of the instrument, dedicated on May 30, 1976, as another reason.

Kime began playing the organ at 13 years of age, and continued playing at Syracuse University, where he attended college. He worked as an accompanist even as a student. He left the area for a time to study at the University of Southern California, but eventually returned to upstate New York, where he spent part of his childhood.

Due to commitments as the organist at religious services in Syracuse, Kime is not officially Colgate’s university organist since he does not accompany university religious services on the weekend. He teaches organ, and plays as accompanist for some Colgate University vocal groups. However, he stated that this concert was above and beyond his duties in this position, and was something he chose to do in conjunction with the music department.

The concert was attended by members of the Colgate community and people from the surrounding area. Attendees included several students who are, or have been, students of Kime’s or have worked with him in University Chorus or Chamber Singers.

Katy Fallows is a Colgate senior and studied organ under Kime last year.

Fallows said that she attended the concert in part because he had been her teacher, and also, “I knew he liked more dramatic, loud, aggressive music, and I kind of liked that, so I went to see that.”

The concert ended with long applause and a standing ovation. Many attendees gathered for refreshments in the lower level of the chapel, and Kime cheerfully greeted those who stayed in the crowded room.

The room was abuzz with friendly chatter about the performance, and many stuck around for an hour after the show cheerfully munching on fruit and snacks and sipping punch.

This concert was a part of the Fall 2007 Colgate Concert Series, which will also include many more upcoming concerts featuring both Colgate musicians and many visiting musicians. Be sure to watch for more concerts in this series coming up later this semester!