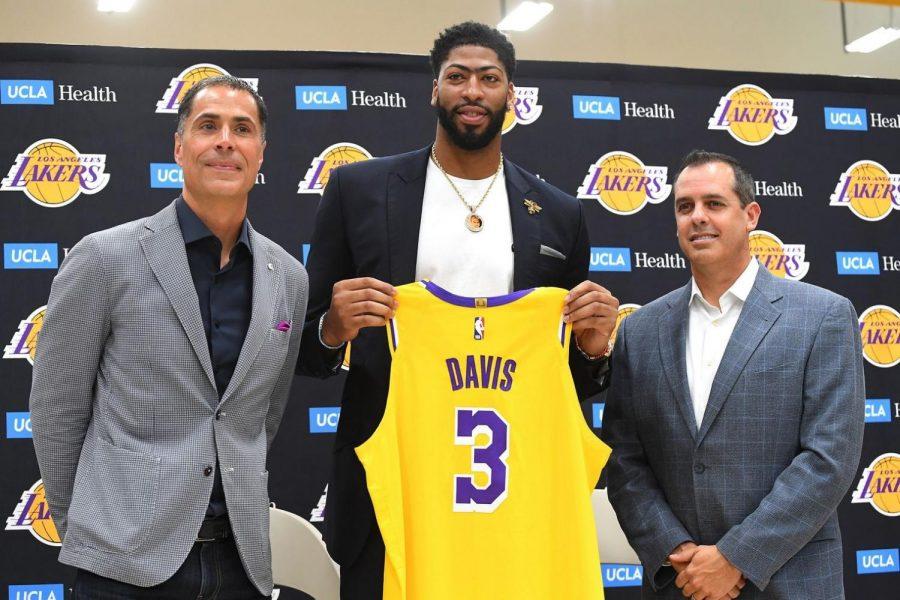 Anthony Davis to the Lakers

On the night of the 2013 NBA Draft, the Brooklyn Nets and Boston Celtics agreed on a trade package that shocked general managers around the league. In a desperate win now move, the Celtics sent two aging franchise stars, center Kevin Garnett and forward Paul Pierce, to Brooklyn for matching salaries, three unprotected first round picks and one first round swap, with the last pick sent in 2018.

The trade turned out to be a disaster for the Nets, as the Celtics used the acquired draft capital to add core pieces to their roster: guard Jaylen Brown and forward Jayson Tatum, selected third overall in the 2016 and 2017 NBA Drafts, respectfully. Garnett and Pierce, past their primes, added little to the Nets and GM Billy King was unceremoniously fired. The swap is considered one of the most lopsided in recent NBA history and the sheer framework of a deal like this is something I thought would never happen again. Only thing is, it happened twice this summer and superstars Anthony Davis and Paul George are now in Los Angeles.

While the Los Angeles Lakers were justified in what they sent to the New Orleans Pelicans to acquire Davis, they gave up even more than the Nets did in 2013. The Lakers gave the Pelicans quality rotation pieces that will contribute immediately. The Pelicans additionally will receive some control of the Lakers’ first round picks starting in 2021 through 2025. Davis has only one year left on his current contract, but it is the league-wide expectation that he will remain with the Lakers long term.

While fans and analysts widely expected the Davis-to-the Lakers move this offseason, the NBA community was stunned at nearly 2 a.m. EST — as news broke that forward Kawhi Leonard committed to sign with the Clippers — that the Clippers acquired forward Paul George from the Oklahoma City Thunder for a haul even larger than what the Pelicans received from the Lakers. The Thunder received a package of players similar to what the Pelicans got along with five first round picks through 2026 (four of which are unprotected). While the haul was greater than what the Lakers swapped for Davis, the in-city rival Clippers were under pressure to complete a deal with the Thunder since they had reason to believe Leonard would commit to the Clippers if they could land another superstar. At the same time as landing two stars, the Clippers prevented the possibility of watching Leonard sign with the Lakers to join LeBron James and Davis.

The two big offseason moves may signal a change in how NBA front offices will look to build their rosters. Now, the value of draft picks has decreased and teams are more willing to part with significant draft capital for superstar talent.

The situation involving Davis is the perfect example of why draft picks may have less value. Davis was one of the most well-rounded and likely prospects to succeed coming out of college since James made the jump from high school, and since then he has developed into the NBA’s best big man. However, by leaving New Orleans at 26-years-old, Davis will now be playing most of his prime years on a team that did not draft him.

These trades promote the idea of “pre-agency.” Across sports, there are disgruntled stars on a struggling teams who are free agent eligible in two years or fewer. More often we are seeing these stars use their leverage to force a trade to a team(s) they request. Davis forced a trade to the Lakers, and when Leonard contacted George about teaming up with the Clippers, George, who had signed a four-year max contract with the Thunder in 2018, told GM Sam Presti about his desire to play with Leonard. He was traded days later.

In fact, when looking at drafts between 2008 and 2015, only four top-five picks that became all-stars are still on their original teams: guards John Wall and Bradley Beal, and centers Joel Embiid and Karl-Anthony Towns. Of those players listed, Wall may miss all of next season due to a ruptured achilles tendon, and is due $171 million over the next four seasons. Beal is likely the next major pre-agent to hit the market, and Towns may become one if the Timberwolves fail to have any significant postseason success over the next year or two.

Meanwhile, the Toronto Raptors did not have anyone drafted in the lottery on their championship roster, and were led by Kawhi Leonard, who they had traded for the previous summer.