Much More Than Girl Power: 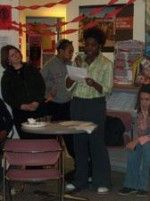 International Women’s Day was marked by celebrations around the globe on March 8, at Colgate in the Women’s Studies Center, with events sponsored by Women’s Studies, the Dean of the College, the Sophomore Year Experience and the Office of Undergraduate Studies.

The day celebrated the achievements of women internationally in the economic, political and social spheres. The idea of holding such a day was born in 1909 out of consideration for women’s role in the world’s rapid industrialization and economic growth.

Quirindongo made a public invitation to the catered buffet of international cuisine. Guests enjoyed a variety of foods of Native American, Japanese and Puerto Rican origins. A slice of cheesecake and banana dessert was the last course of the meal.

While people bit into their sushi or sipped on their fruit punch, several students took the stage to present pieces of poetry, to sing or play an instrument or to talk about their experiences being a woman in their particular culture or a foreign setting.

“I represented Puerto Rico. I chose to perform that poem because it expresses how society sees the narrator as a mother and wife, but she wants to be who she wants to be and not what others want her to be. I find it powerful that she doesn’t give in to society’s expectations and stereotypes,” she said.

Native American junior Audrey Stevens spoke about the matriarchal environment she grew up in. She talked about the customs of her particular tribe, and specifically about the rite of passage that young girls must engage in as they enter womanhood.

“I personally never knew that this day was celebrated worldwide, but I would definitely like to see more people involved next year,” Matos said.

“I feel that it is important to reach out to different people with different interests and from different backgrounds and encourage them to come into the Center,” Guevara said. “International Women’s Day is a unifying day and bringing different dishes from all over the world was a reminder of that global unity.”