End of the Journey 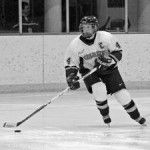 The women’s hockey team has concluded its best season in program history. Although it ended in a loss, this team has a lot to be proud of and has set a standard of excellence for Colgate women’s hockey.

The final game of the season came against Dartmouth, the top seed in the ECAC playoffs, after the fifth-seeded Raiders reached the semifinals by sweeping the Princeton Tigers. That momentum gave the squad optimism entering the big game.

“They did finish first in the league, but we’re the only team (both in league and out of league) to have beat them on their own ice,” senior Tara French said before the contest. “We need to be aware of their strengths, but most importantly we want to generate a fast-paced and efficient team effort.”

Sophomore Elin Brown said special teams played a large role in their potential success. “In order to beat Dartmouth we can’t get penalties because their powerplay consists of four Olympians.”

Unfortunately for the Raiders, they were unable to stay out of the penalty box, as the Big Green’s powerplay, ranked third nationally, contributed two first period goals to give them a lead at the first intermission.

Colgate battled back in the second period, when Brown found first-year Ali Edell for a tally at 6:22 to cut the deficit in half. Towards the end of the period the Raiders had a number of chances, including a blast off the post, but were unable to net the game-tying goal.

The Big Green, the eventual tournament champions, controlled the third period, however, adding a pair of late goals to make the final score 4-1.

A loss in the semifinals of the ECAC playoffs, however, is nothing to be ashamed of for the Raiders. The league was very tough this season, as it sent three schools to the NCAA Tournament (St. Lawrence, Harvard, and Dartmouth) and one to the Frozen Four (St. Lawrence). Dartmouth, after winning the ECAC, was stunned in the Elite Eight when Boston College won in double overtime.

Despite the loss of five seniors, the future is very bright for the Raiders. They return a number of starters, including their top three scorers (sophomore Sam Hunt, first-year Katie Stewart, and Brown.)

The ECAC, as well as the women’s hockey nation, had better be ready for Colgate in 2007-08 because this young squad should only improve.