The Colgate Maroon-News • May 2, 2019 • https://thecolgatemaroonnews.com/1251/sports/nattysports/giants-select-quarterback-daniel-jones-with-sixth-pick/ 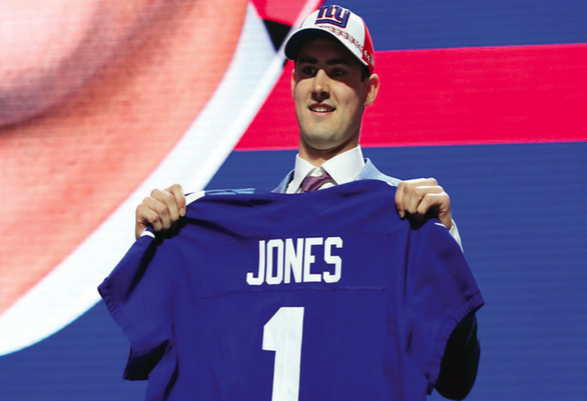 The New York Giants shocked the football world by passing up on several top prospects for Duke quarterback Daniel Jones at the sixth overall pick.

This offseason has been nothing short of a disaster for the New York Giants. It began when they let defensive leader Landon Collins walk as a free agent and sign in the division with Washington. That same week, the Giants gifted superstar wide receiver Odell Beckham Jr. to the Cleveland Browns for a relatively small return. And in the first round of the NFL Draft, instead of taking record-setting quarterback Dwayne Haskins or Josh Allen, an elite pass-rusher, they inexplicably selected Daniel Jones, who threw 52 touchdowns in his three-year career at Duke, while Haskins threw for 50 last season alone at Ohio State. They have become the laughing stock of the NFL, and only have general manager Dave Gettleman and his ego to blame.

Gettleman has previous experience as an NFL executive with the Carolina Panthers from 2013-2016. Yet while the Panthers made Super Bowl 50 during his tenure, most of the roster foundation, including that season’s MVP Cam Newton, was assembled under a previous front office. When Carolina fired Gettleman before the 2017 season and brought back the front office they had before his arrival, fans mostly celebrated, as he is remembered for inexplicably releasing franchise icons Steve Smith, DeAngelo Williams and Josh Norman, players who were on the team before Gettleman arrived, and all proved that they could play at high levels at each of their next teams.

Once Gettleman joined the Giants, he was intent on creating his own roster, even if it meant making moves that would frustrate Giants fans. While I am critical of Gettleman’s decision to let Collins walk, there was an argument in favor of it, as his limitations in coverage made him less valuable to some fans and coaches. Instead of letting him walk, they could have applied the franchise tag, and definitely could have attained some trade value in the 25 year-old safety.

Gettleman revealed his intent to trade Beckham when he was critical of the team during an ESPN interview on the Giants’ struggles last season. With a player as talented as Beckham, acquiring Jabrill Peppers, the 17th and 95th pick gave a very low return. What bothered the fanbase, however, was what Gettleman stated after the end of the season. Referring to Beckham, he stated “[I] didn’t sign [Beckham] to trade him.”

Coming into the NFL Draft, there were two trains of thought for what the Giants should do with their first round picks. One would be to take a quarterback at pick six, then a pass rusher at pick 17, or take a pass rusher at six and then maybe take a quarterback later in the draft. Gettleman went with the first option, but made what I believe could go down as one of the worst draft mistakes in NFL history by passing on Haskins for Jones.

He selected Jones largely because of his college coach David Cutcliffe, who also coached both Eli and Peyton Manning in college, choosing familiarity over productivity. Jones even has a similar build to the Mannings, standing at 6’5” and weighing 220 pounds.

Fans and players alike were disappointed. Jones was my fifth ranked quarterback, after Haskins, top pick Kyler Murray, Drew Lock and Will Grier. The viewing party at MetLife Stadium went into apoplectic shock when Roger Goodell announced the pick. Even my father, who is a much more positive fan than I am, was dumbfounded by the selection. On social media, where most players welcome their new teammates, Giants players remained mostly silent after this selection. In fact, linebacker Alec Ogletree welcomed both of their other first round selections on Twitter. Even worse, the Washington Redskins selected Haskins, so he will have the opportunity to prove the Giants wrong twice every season.

Gettleman’s explanation of the pick was even more puzzling than the pick itself. He said that after watching Jones’ impressive performance in the Senior Bowl, it was enough to consider Jones worthy of being a “professional quarterback.” This is one of the laziest answers that I have ever heard an executive make on evaluating a quarterback, focusing on three drives in an exhibition game rather than a full season’s body of work. He also said that he may have Jones sit for up to three seasons, mentioning Aaron Rodgers.

However, Rodgers was sitting behind Brett Favre, and Jones does not have even close to the talent that Rodgers has. As fans, we want to see Jones play some time this year, so that we know if he can be a good starting quarterback in the future. If not, cut our losses in QB rich classes next year and in 2021, which include Tua Tagovailoa and Trevor Lawrence, respectively.

Speaking for all Giants fans, I hope that Gettleman is right about Jones, and he can develop into an elite quarterback at the pro level. However, he will unfairly be compared to Haskins, who most fans would have preferred over Jones. If Haskins becomes an elite quarterback while Jones never develops into an above average starter, this offseason will cement Gettleman’s legacy as one of the worst executives in NFL and New York sports history.