The Colgate Maroon-News • May 2, 2019 • https://thecolgatemaroonnews.com/1257/sports/csports/mens-lacrosse-loses-to-bucknell-in-final-game/ 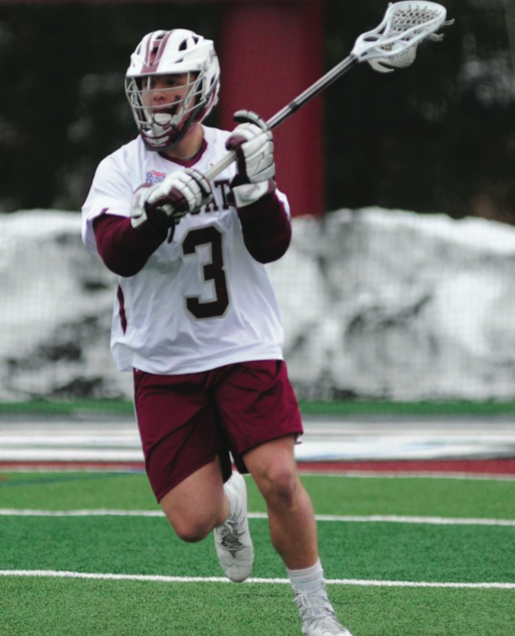 Raiders Finish Once Promising Season at 4-9

The Colgate Men’s Lacrosse team closed out their season this past week with a tough battle against Bucknell. Although the two teams ended the first quarter of play with a tie, the Bucknell Bison fought until the final whistle to grab a win over the Raiders. The Bison needed this win to clinch a spot in post-season play after Navy defeated Boston University and Holy Cross defeated Lehigh, leaving Bucknell in a three-way tie (with Navy and Holy Cross) for fifth place in Patriot- League play. Despite the Raiders’ strong early season efforts, they were not able to earn a spot in this year’s tournament.

Sophomore attacker Jimmy Caddigan started off strong scoring the first two goals for the Raiders, giving Colgate an early 3-2 lead. Senior attacker Sam Cleveland added a goal for Colgate off an assist from junior midfielder Griffin Brown to end the first quarter 3-3. Bucknell was able to outscore the Raiders 3-1 in the second quarter, advancing their lead to 6-4 at halftime. Cleveland then scored to put Colgate on the board for the first time in the second half with 13:02 left to play in the third. The Bison then held the Raiders scoreless for eight minutes while putting up two more goals, advancing their lead 8-5. First-year midfielder Brendan Jordan scored off an assist from junior attackman Nicky Petkevich, who had recently returned from an injury, to bring Colgate within two. Caddigan came back strong and added an additional two goals in the fourth off assists from Cleveland and Petkevich. Although Caddigan had his first multi- goal game of the season and surpassed his career high of three goals in a game, Colgate was not able to narrow the two-goal deficit and fell to Bucknell 10-8. Senior Goalkeeper Connor Mullen put up 13 saves for the Raiders.

Colgate ended their season 4-9 overall and 2-6 in the Patriot League. Cleveland finished his career with 18 goals and 17 assists on the season, second on the team in points. Senior midfielder Will Blumenberg earned First Team All-Patriot League honors in addition to Brown earning Second Team All-Patriot League honors. Although the season ended sooner than Colgate would have liked, the Raiders accomplished a lot this season, such as upsetting #10 Syracuse University in their season opener and dealing with a great deal of transition from last season. The Raiders end their first season under new coaching staff lead by Head Coach Matt Karweck and Assistant Coach John Crawley and will graduate 11 seniors from the program.

“It was a tough way to end the season with a close loss to Bucknell but I think all the work we put in with the new coaching staff this season is going to be used as a good stepping stone for the future of the program,” Senior midfielder Matt Donovan said. “I know the team will capitalize on all we learned this year and work hard to secure a spot in postseason play.