Raiders Rise to Second in ECAC 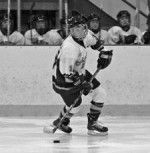 The women’s ice hockey team continued its great play last weekend at Starr Rink, hosting RPI and Union in a pair of important ECACHL contests while riding a four-game unbeaten streak, having lost only one of its previous nine games.

Senior goaltender Brook Wheeler was stellar between the pipes against RPI, stopping all 21 Engineer shots en route to her third shutout of the season, a 3-0 victory.

Anchoring the offensive end were a number of standout rookies. Less than two minutes into the game, first-year Nicole McDonald recorded her first career collegiate goal, giving the Raiders an early 1-0 lead. Assisting on the opening tally were fellow first-years Marissa Dombovy and Ali Edell.

Junior Mallory Johnston doubled the Colgate lead in the second period as she sent a puck through traffic that beat the screened Engineer goaltender and ended up in the back of the net. Senior captain Tara French recorded the assist.

Midway through the second period, star sophomore Sam Hunt continued her brilliant play. The Time Warner announcers at the game began running out of superlatives to describe her vast array of skills. She added another beautiful assist to her r?esum?e, this time with a perfect backhand pass to a streaking Katie Stewart, another one of Colgate’s first-years. The Hunt pass required a mere deflection, which Stewart provided with ease, as the Raiders increased their lead to three.

The dominating performance against RPI, however, was nothing compared to the following afternoon’s game against Union.

The final score of the Union game was 9-0. That in itself tells everything one needs to know about the game, as the Raiders absolutely dominated every aspect of the contest.

In goal, sophomore Elayna Hamashuk continued where Wheeler left off from the night before, although she did not face much opposition. In two periods of play, she recorded eight saves, while first-year Sara Plunkett played the final period, where she stopped both shots she faced.

“Our goaltending was a key asset this weekend,” French said. “All three goalies contributed over the two games, and to have no goals against is a great accomplishment.”

On the offensive end, it was an enjoyable game for the entire Raider squad. Fifteen of the 18 skaters who played recorded at least one point. Leading the way were French and Stewart, each with three points, while a handful of players added multiple points in the win.

As the regular season enters its final month, there is a lot to be excited about in Hamilton. After playing their best hockey of the season since the beginning of the New Year, the Raiders are poised to keep the momentum rolling.

“We are working very well as a functional unit and we have the trust and confidence in each other to get the job done,” French added. “At this point, we have our eyes on home ice advantage and the second round of the playoffs, which would both be a first for our program.”

Currently, Colgate is tied for second in the ECACHL standings with Harvard, the fifth-ranked team in the nation. Dartmouth sits atop the standings, four points ahead of the Raiders and the Crimson.

Colgate puts its six-game unbeaten streak on the line this weekend at St. Lawrence and Clarkson. And mark your calendars now: next weekend, February 9 and 10, the Raiders host Dartmouth and Harvard in the ECAC games of the year for Colgate.