The Colgate Maroon-News • May 2, 2019 • https://thecolgatemaroonnews.com/1273/sports/nattysports/devin-bush-brings-versatility-to-steelers-revitalized-defense/ 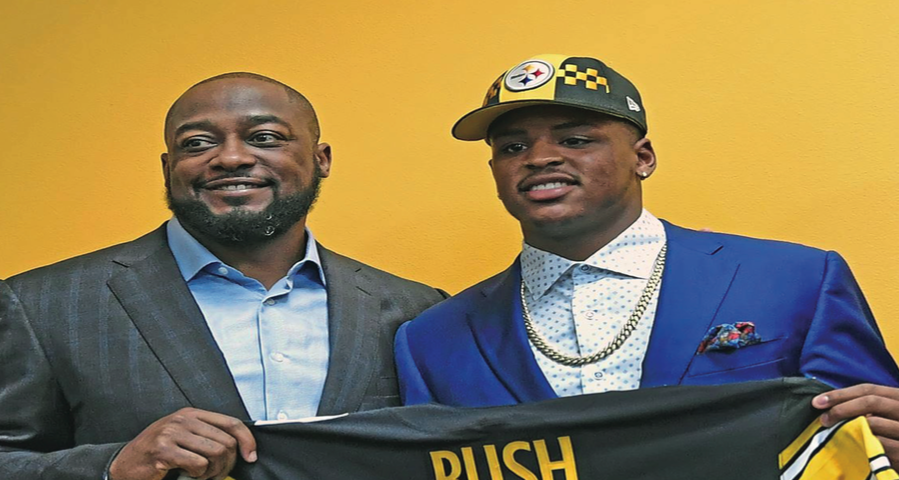 The Pittsburgh Steelers shocked the football world by trading up to the 10th pick in the NFL Draft on April 25. The Steelers, who previously occupied the 20th pick in the first round of the draft, acquired the 10th pick from the Denver Broncos in exchange for Pittsburgh’s 2019 first-and second-round picks, as well as its third-round pick in the 2020 NFL Draft. With the newly acquired pick, the Steelers selected Devin Bush, an inside linebacker from Michigan.

The Steelers had to give away a valuable second-round pick from this year in order to move up to the 10th draft slot. That said, Bush comes to Pittsburgh with an incredible motor and unparalleled skillset. The Michigan product was an absolute star throughout his three seasons in Ann Arbor, compiling an impressive 172 tackles and 10 sacks during that time.

However, Bush’s true value seems to lie in his speed and athleticism. At the 2019 NFL Combine in late February, Bush ran a 4.43 second 40-yard dash, good for second among all linebackers invited. Additionally, Bush also topped the linebacker charts in the vertical jump drill, where he completed a 40.5 inch vertical jump. Bush is clearly a freak athlete and, at middle linebacker, his quickness and agility are highly sought-after skills in today’s NFL.

The Steelers certainly wanted to take Bush because of his speed and strength. That said, Bush also fills the immense void left by linebacker Ryan Shazier, who suffered a devastating spinal injury in a game against the Cincinnati Bengals during the 2017 NFL season. Shazier was a Pro-Bowler and an extremely physical player, so his intensity was greatly missed by the Steelers following the injury.

Devin Bush provides the Steelers with an optimal replacement, as they have been without a reliable young inside linebacker since Shazier’s departure. In fact, Bush’s style of play is quite reminiscent of Shazier’s. Both have the quickness and strength to break into the backfield and get at the quarterback on blitz plays.

Bush and Shazier are also both solid in coverage against tight ends and wide receivers, a skill that is rarely seen in most linebackers.

Assuming that he can stay consistently healthy for the Steelers, Bush will hopefully become a new centerpiece for Pittsburgh to continue to build its defense around. After all, trading up for Bush was not cheap, so expectations will be relatively high for Bush as he heads into his rookie year with such a historic franchise.

The Steeler’s draft day trade also seems to symbolize the start of a new era in Pittsburgh. Following a turbulent offseason which resulted in the departure of wide receiver Antonio Brown and running back Le’Veon Bell, the Steelers were left looking to fill holes and work with what they have left. Bush will definitely make this recovery process much easier, and hopefully his energy and tenacity will rub off on the rest of the Steeler’s defensive unit.