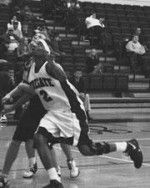 Casual basketball fans are familiar with offensive statistics such as points, assists, and field goal percentage. However, one relatively obscure statistic that most people do not know about is called PPS, or points per shot. This stat is found by taking the amount of points a player scored divided by the amount of field goals and free throws that were attempted. Last season, NBA MVP Steve Nash had a PPS of 1.115 to lead the league.

That stat makes senior captain Jon Simon’s performance in a 67-54 exhibition win against the University of Waterloo last Friday extremely impressive. Simon scored a total of 18 points (16 in the first half) on 7-7 field goal shooting, giving him a PPS of 2.571 and establishing himself as one of Colgate’s biggest offensive threats for the upcoming season.

Colgate will play their regular season home opener against Stony Brook on Friday at 7 pm. For the Raiders to have a successful year, their defense will have to remain strong and they’ll need plenty of fan support to try to stop Bucknell from winning a third straight Patriot League title.

“I think it helps our guys a lot if we have support,” Davis said. “We need our Raider Nation down at Reid Athletic Center.”