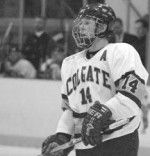 Over the Thanksgiving break, Colgate’s men’s ice hockey team participated in the 56th annual Rensselaer/Bank of America Holiday Tournament at RPI’s Houston Field House. Coming off the previous weekend’s 3-1 loss to Quinnipiac and 4-2 win against Princeton, which snapped the team’s seven-game winless skid, the Raiders hoped to turn their season around and begin their push for ECAC playoffs.

In game one on Friday, the team ousted Ohio State 4-2. Only a couple of minutes into the game, Colgate took a 1-0 lead on a 5-on-3 power-play opportunity off senior Marc Fulton’s ninth goal of the year. Just 1:04 later, with the teams skating 4-on-4, Colgate struck again. This time it was junior Mike Werner who scored his second goal of the season.

The Raiders increased the lead to 3-0 on another 5-on-3 power-play later in the first. Sophomore Tom Riley picked up his fifth goal of the season on the play.

Ohio State finally got on the board with a 5-on-3 power-play of its own in the second period, but Colgate responded with another 4-on-4 goal to put the Buckeyes away halfway through the third period. Junior Jesse Winchester picked up his fourth of the season on the transition goal.

Ohio State cut the lead to 4-2 with a 4-on-3 power-play goal with less than 3:30 on the clock, but that was how the score remained at the end of regulation. Junior starting goaltender Mark Dekanich played a key role in the match as the Raiders were outshot 30-17. He finished the game with 28 saves.

The following evening the Raiders faced Niagara for the championship. Though the Raiders took the initial lead off Fulton’s tenth of the season, the Purple Eagles roared back with three straight goals in the second and third periods, defeating the Raiders 3-1.

“The team’s playing a little better,” Head Coach Don Vaughan said. “It was disappointing not to win the championship, but we showed signs of life for the first time in three weeks and resembled the team we want to be. We expected to be in a different place than we are now regarding our record. What has to be kept in mind is that there is no quick fix – we have to work through it on a daily basis.”

The team will not have senior Mike Campaner or sophomore Peter Bogdanich for either game this weekend, and a few other players’ health statuses’ are also questionable. But Head Coach Vaughan is still optimistic about the team’s prospects in the league standings.

“The ECACHL is a league with no clear-cut favorite at the moment,” Head Coach Vaughan said. “Everyone is beating everyone. If we can sting together six to seven games we could be in pretty good shape.”

Colgate returns to Hamilton for its final ECACHL weekend series of 2006 next weekend. The Raiders will host Union tomorrow evening, and Rensselaer on Saturday. Both games begin at 7:00 p.m. at Starr Rink.