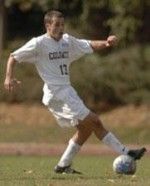 The Colgate men’s soccer team traveled to Lehigh with hopes of winning the Patriot League Tournament, but left empty handed after losing a hard fought game to Lafayette.

The Raiders squared off against the second-seeded Leopards in the first round and started the game out extremely strong. The team barely missed on several opportunities, but with five minutes left in the first half the Raiders finally pounced on an opportunity that gave them a 1-0 lead.

After a foul was called on a Lafayette player, sophomore Glenn Volk sent in a beautiful ball to junior Eric Anton. Anton redirected the ball towards first-year Justin Berney, whose goal gave the Raiders momentum heading into the halftime break. The goal was the first of Berney’s Colgate career.

The men’s defense has been known for clamping down on opposing teams after going up a goal, but they were unable to do so in this game. Although the Raiders played strong defense to start the second half, Lafayette tied the game in the 58th minute with a corner kick goal. The goal gave Lafayette some newfound confidence, and they continued to attack. After fending off numerous Lafayette attacks, the Leopards broke Colgate’s defense in the 80th minute and took a 2-1 lead. The Raiders came extremely close to sending the game to overtime, but Lafayette would triumph, 2-1.

“We came out very strong and were able to take a 1-0 lead,” Head Coach Erik Ronning said. “However, I have to give all the credit in the world to Lafayette who made the plays they needed. In championship soccer it comes down to one or two plays and on this night, those plays did not fall in our favor. I am disappointed with the result, but I am no means disappointed with the effort that everyone gave.”

While the Raiders season comes to a close, they have little reason to hang their heads. Senior captain Eli Meyers and Berney were placed on the All-Tournament Team, after their impressive performances against Lafayette.

Sophomore goalie David Cappuccio had an incredible season in net as he came two minutes from having the longest shut-out streak in NCAA history. His amazing season allowed him to win the honor of Patriot League Goalkeeper of the year.

Furthermore, Meyers, junior Dan Belke and Cappuccio were also named to the first-team All-Patriot League. These three were instrumental in Colgate’s defensive success throughout the season, and they were given the respect they deserve.

Although the team earned many individual honors, the Raiders were most proud to be the first team in Colgate history ranked in the top 25 of the national rankings.

“While I understand we did not get the outcome we wanted at the Patriot League Tournament, I am proud of everything this team accomplished this season,” Ronning said. “We are establishing a winning mentality as this was our second straight winning season and second straight season with an appearance in the Patriot League Tournament. I would also like to congratulate the six graduating seniors on their incredible seasons and without them the program would not be where it is today.”

The Raiders will lose senior goalie Doug Litvack, defenders Kevin Toomey and Teddy Yewdell, midfielders Meyers and Charlie Lambropoulos and forward Devin Deane; these six players will be greatly missed next year. But the team returns a lot of young talent next season, and there is no doubt that the returning players will be hungry for a Patriot League championship next season.